Charred Elf on the Shelf goes out in blaze of glory...in the oven 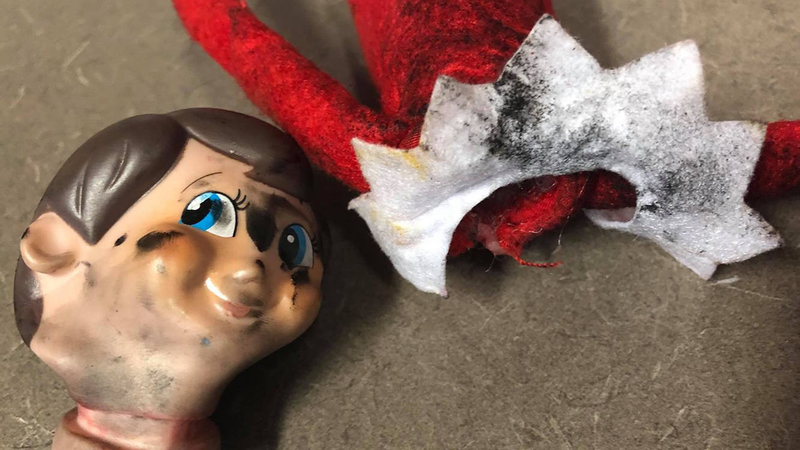 Charred Elf on the Shelf goes out in blaze of glory...in the oven

WYLIE, Texas -- It's not Christmas yet, but the holiday season is over for one Elf on the Shelf who suffered an untimely baking at the hands of a terrified Texas mother.

In a viral Facebook post, Brittany Mease wrote that her kids noticed that Elfis, their Elf on the Shelf, hadn't moved in a few days.

"When they weren't looking, I grabbed him off the kitchen counter and quickly tossed him in the oven until I could move him later and not raise any suspicion," Mease said.

Unfortunately for Elfis, Mease forgot that she had hastily stowed him in the oven. When it came time to make lunch a few days later, she preheated the oven without a second thought.

"About four minutes later I started to smell something REALLY funky and that's when all hell broke loose and I broke my son's heart," Mease recalled.

She hurried to rescue Elfis from the oven, but the damage was done. Elfis was burnt to a crisp.

When Mease attempted to extract him from the oven rack, his head popped off, much to the horror of her young son.

"I would have thought that with Gray being older he would have laughed at it, but...Gray got his little heart broken," she said.

In an effort to save Christmas, Mease gathered her children and placed an emergency phone call to Santa to arrange medical treatment for poor Elfis, who could not make the trip back to the North Pole on his own "because his head literally popped off from being too hot once we pulled him out of the oven and his feet are completely melted off," she quipped.

While Mease did have a backup Elfis in her home, she's now faced with a quandary: re-introduce Elfis 2.0 or let the Elf on the Shelf tradition (that she admittedly hated) go down in flames?

But Mease wasn't the only one who wasn't completely bothered by Elfis' demise. Her daughter, Ily, looked to the bright side of the situation.