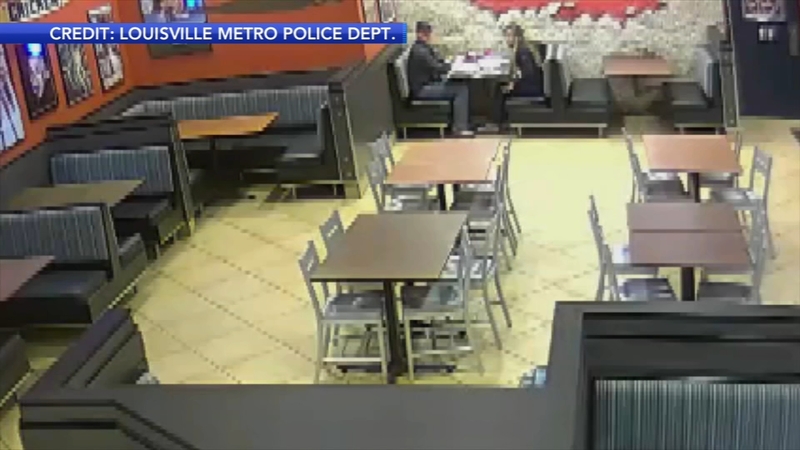 LOUISVILLE, Kentucky (WPVI) -- It started off as a quiet date for two married off-duty Kentucky police officers, but their night took a turn when they jumped into action to stop a robbery at the restaurant.

"Every week, we make sure we have a date night," Chase said.

On Sunday, date night for the couple from Elizabethtown took them to the Louisville restaurant Raising Cane's.

"That's actually where right after we got married, that's where we ate dinner. Same location," Nicole said.

"Generally when we go away from home, it's to be away from the job. We don't have to worry about seeing people we know. This is not how it turned out this time.," Chase said.

The McKeowns were enjoying their meal when police say Justin Carter walked through the doors wearing a mask.

Surveillance video shows Carter walking up to a woman at the cash register, pulling out a gun, and demanding cash.

Carter didn't know that the couple having a date were members of the Elizabethtown Police Department and, while they were off-duty, they are never really off the clock.

"There was literally no question. We looked at each other - 'is this happening? Let's go,'" Chase said.

Chase and Nicole took out their guns and yelled at Carter to drop his weapon. Carter then ran out the door leaving his gun behind.

The McKeowns didn't just stop once Carter left the restaurant. They chased him and put him under arrest.

The McKeowns have been praised as heroes, but they say they're not looking for any accolades.