Family, friends still reeling from fire that killed 12 in the Fairmount section of Philadelphia

"We put the crosses so I can pray for them, and hope they made it to God and God can take care of them," said a relative.
WPVI
By Gray Hall 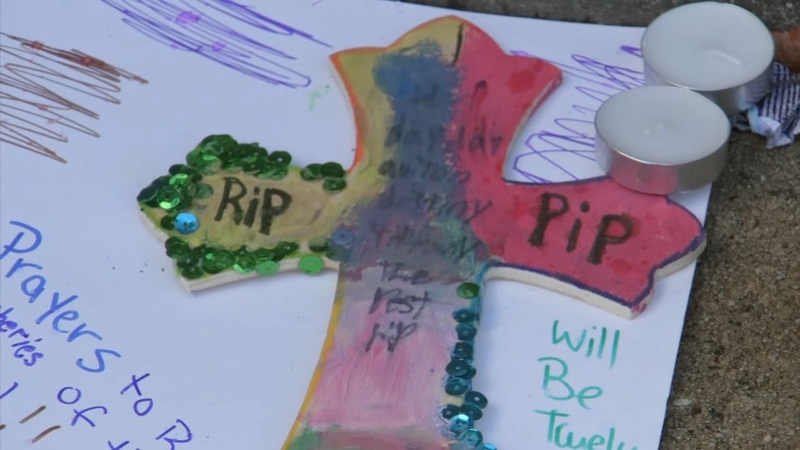 Family, friends still reeling from fire that killed 12 in Fairmount

PHILADELPHIA (WPVI) -- Family, friends and members of the Fairmount community came together on Friday for an impromptu vigil to remember the 12 people killed in the duplex fire this week.

The fire in Philadelphia earlier this week took the lives of 8 children and 4 adults.

Markese Robinson says his brother and 5-year-old nephew made it out alive and are now recovering in the hospital.

"He is strong. He is in there recovering right now and trying to wrap his mind around the fact that he just lost his whole family in one shot but he still has a purpose to live for," said Markese Robinson.

Ten-year-old Micah Robinson is still trying to process his cousins are gone.

"We put the crosses so I can pray for them, and hope they made it to God and God can take care of them," said Robinson.

The 12 victims were killed in the fire around 6:40 Wednesday morning in the row house duplex in the 800 Block of North 23rd Street.

Family members identified one of the victims as 32-year-old Virginia Thomas. A second sister, who was identified as Rosalee McDonald, died in the fire along with her six children: three boys and three girls.

There are still many unanswered questions about the Fairmount fire, the deadliest in the city in more than 100 years. Here's what we know so far.

"All I have is happy thoughts of them. They were so cheerful. Every time I saw them, they were always full of life and ready to go. That's how we are going to continue to remember them, full of life and full of energy," said Markese Robinson.

Investigators promise no stone will be left unturned as they work to figure out what started the fire. Fire officials say 18 people were living in the upstairs apartment, and another eight lived on the first floor.

Neighbors who knew the victims say this community can never be the same.

"I have had time to pray and to just kind of take a moment and remember the kids that I was closest to. I think processing it with my friends who also were connected to the family has been the most helpful," said Fairmount resident Mariah Bankemper.

Chopper 6 over the scene of a fatal house fire in the Fairmount section of Philadelphia.

The Philadelphia Housing Authority says both units had working smoke detectors, all powered by 10-year lithium batteries, when housing officials inspected the property last May.

But firefighters say those smoke detectors were not working.

"What I would say to the community is thank you for your prayers. Just keep him in prayers for after this. It's mental. He told me he feels like he has to start all over but I am trying to give him strength to let him know he still has support," said Robinson.
Investigators say it could be weeks before an official cause is released.
Report a correction or typo
Related topics:
fairmount (philadelphia)philadelphiafatal firefire
Copyright © 2022 WPVI-TV. All Rights Reserved.
FIRE
Medford Twp. house fire leaves 74-year-old woman dead
Fairmount fire survivors describe terrifying scene, last-minute escape
1 killed in Delaware house fire
Funeral services held for 12 killed in Philadelphia fire
TOP STORIES
Truck with 100 monkeys crashes, 1 still on the loose, police say
Montco health department ties 10 hepatitis A cases back to restaurant
Arnold Schwarzenegger involved in multi-vehicle crash
Two people dead in separate hit-and-run crashes in Philadelphia
NYPD officer killed, suspect is from Allentown
Shootout at Northern Liberties gas station
Driver dies in fiery crash in Port Richmond
Show More
AccuWeather: Frigid Start
Grocery stores faced with heavy impacts amid supply chain issues
Temple U updates mask guidelines ahead of students' return to campus
Police officers, good Samaritan lift SUV off trapped woman
Laundrie claimed responsibility for Petito's death in notebook: FBI
More TOP STORIES News