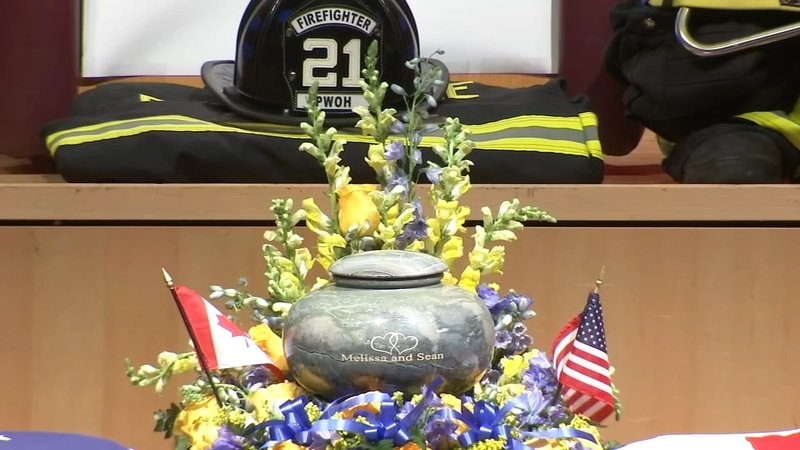 The volunteer firefighter with the Penn Wynne Overbrook Hills Fire Company died from injuries he sustained in a July 4 blaze.

DeMuynck responded to a fire in Wynnewood just after 10:30 p.m. on Independence Day. Roughly a half-hour later, a mayday call went out.

He was unresponsive on the third floor of the structure and passed away at Lankenau Hospital.

35-year-old Sean DeMuynck lost his life while fighting a fire this past Sunday in Lower Merion Township.

DeMuynck joined the volunteer fire company in 2019 after moving to the area from Canada.

His father told the crowd of mourners his son was his best friend, and he fondly spoke about his son's love of hockey.

The fallen firefighter's widow, Melissa Richard-Greenblatt, also took to the podium to remember him, not as a firefighter but as a husband.

"I will miss your smile, your laugh, the way you tease me about everything, and how complete you make me feel," said Richard-Greenblatt.

DeMuynck's fire chief, Chas McGarvey, also spoke about the man who made volunteering a priority.

"Thank you for sharing your brother, son, and husband with us. From the bottom of my heart, I'm sorry," McGarvey said to the DeMuynck's family.

Firefighters from across the region came to show their respects, including The Phoenixville Fire Department 65.

Firefighter Tami Hopple expressed her sympathies on behalf of the department.

"We're all volunteers. We appreciate all that volunteers do, but this was a really deep hit to our community," said Hopple.

Residents who did not even know DeMuynck, like Carlotta Hutton of Haverford Township, also came to the memorial to support their local first responders.

"My heart goes out to all service people, and the firefighters really should be recognized more than they are, same with police," said Hutton.