The involving officers have not been charged, but two teenagers have.
WPVI
By Katie Katro and 6abc Digital Staff 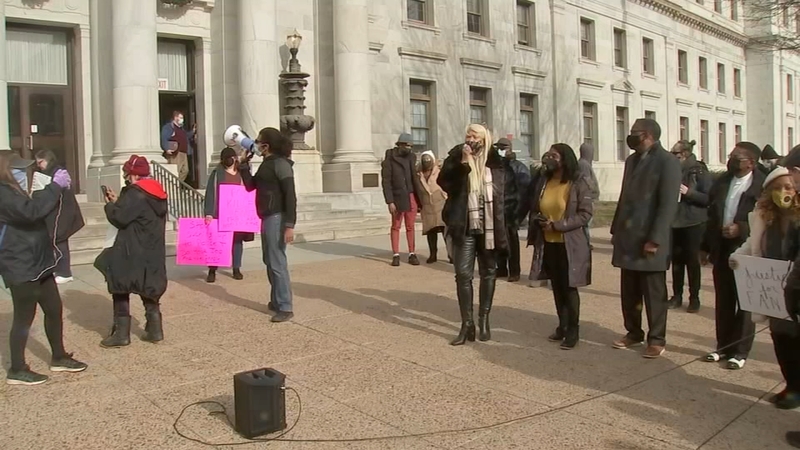 MEDIA, Pennsylvania (WPVI) -- Frustration and a call to action were on display at a gathering for a young girl killed by police.

Eight-year-old Fanta Bility did not survive when several Sharon Hill police officers fired their weapons outside of a football game last year.

Those officers have not been charged, but two teenagers have.

At this point, any possible charges for the officers involved are in the hands of a grand jury.

"Most importantly, we want to stand united in seeking accountability against the officers," said Sean Damon, organizing director of Amistad Law Project.

"Moving forward, we need to be sure this never happens to another family," said Ashley Dolceamore, Co-founder of Delco Resists.

Authorities have announced charges against two teenagers in her death, even though they are not accused of firing the fatal shot.

Hasein Strand, 18, of Collingdale is also charged. Investigators said Ford and Strand got into an argument at the game, leading to their exchange of multiple gunshots not far from the stadium on the 900 block of Coates Street.

Authorities have said that three Sharon Hill officers were positioned opposite the exit, and as the gunfire broke out, a car turned onto the street directly in front of them.

The gunfire and the movement of the vehicle "precipitated responsive gunfire" from the officers.

Many community members Thursday said they want to see the officers held accountable. They are also asking for their names to be released, just as the names of the teens have been.

"There is always hope when people mobilize; when we come together to speak out against injustice," said Nia Holston, staff attorney for the Abolitionist Law Center.

The Delaware County District Attorney's Office said an investigative grand jury is determining whether the police officers' use of deadly force was justified.

The District Attorney's Office is not releasing the names of the police officers unless they are charged, according to Margie McAboy, director of policy and public engagement.

Strand has a scheduled arraignment outside the courthouse Tuesday, where activists plan to gather around 9 a.m.