Funeral for FDNY firefighter who fell to his death in Brooklyn 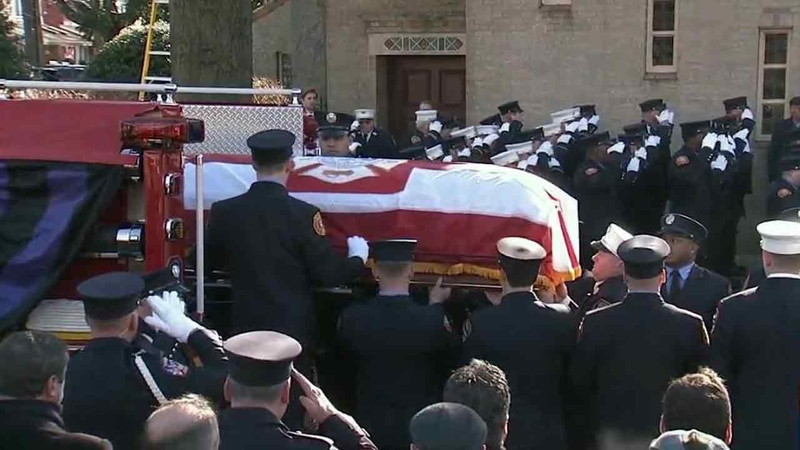 Funeral for FDNY firefighter who fell to his death in Brooklyn

MILL BASIN, Brooklyn -- Friends, family and fellow firefighters gathered Friday to bid a final farewell to an FDNY firefighter who died in the line of duty in Brooklyn earlier this week.

Funeral services were held for 30-year-old Steven Pollard, who died last Sunday while trying to save victims of a crash when he fell through a gap on the Belt Parkway.

Thousands of firefighters in dress uniform stood silently at attention along a Brooklyn street outside the Good Shepherd Roman Catholic Church for Friday's funeral.

A billboard bearing Pollard's image and the words "rest in peace" adorned the church lawn. The sound of bagpipes filled the air.

Pollard, of Ladder Company 170, was running toward the accident late Sunday when he slipped into a gap between bridge spans and plunged about 50 feet.

He had followed his father and brother into the Fire Department of New York just a year and a half ago.

"Steven had great things coming," said FDNY Captain Jimmy Quinn, of Ladder 170. "We knew that he was going to be a leader in the house someday, and he will be sorely missed. It was in his DNA to become a firefighter. He was a man of few words, but he set an example in the way he did his job."


Friday's procession to the church included a fire engine carrying a large tribute to the New York Rangers, as Pollard was a passionate fan of the team.

The Rangers stopped to pay their respects Thursday night with a moment of silence honoring the firefighter.

FDNY Commissioner Daniel Nigro said the department wants the family to know they are with them.

"A mother, father, brother losing a young man like this can't really be comforted," Nigro said. "We will always be with them, we say we'll never forget, we really mean it. This family will always be a part of our family and I hope that knowledge comforts them."

Commissioner Nigro also said they will start training their firefighters on how to pass gaps on elevated bridges, saying his crews often respond in the opposite direction to accidents.
"At a time when people are tempted to get cynical and wonder where our heroes are, where sacrifice and selflessness is, all you've got to do is think about Steven Pollard," Cardinal Timothy Dolan said.


"Some people never get to experience the love we shared," Pollard's girlfriend wrote online Wednesday. "I was lucky to have it with the greatest man I will ever know. I love you so much. Rest in the sweetest peace."
Pollard comes from a family of firefighters. His father, Ray Sr., served 31 years in Brooklyn. His brother, Ray Jr., served 11 years in Brooklyn.

Pollard is the 1,151st member of the FDNY to die in the line of duty.