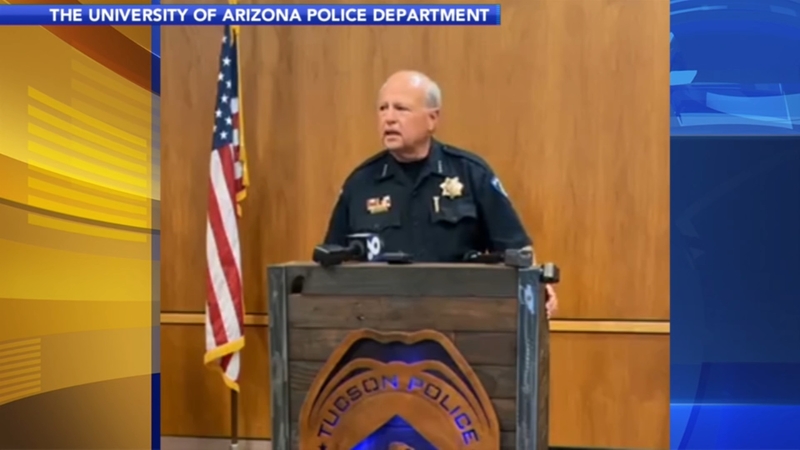 LOWER MORELAND, Pennsylvania (WPVI) -- The University of Arizona Police Department has announced three arrests after a Lower Moreland High School graduate was killed in an on campus parking garage.

The three teenagers were all arrested and jailed on suspicion of first-degree murder and drive-by shooting in the killing of 20-year-old UArizona student Forrest Keys, police said.

Keys, from Huntingdon Valley, was a sophomore majoring in communications.

According to police, Keys was walking with friends in the garage at about 11 p.m. on Feb. 20 when they encountered a maroon Cadillac sedan. Those inside the vehicle began taunting Keys and his friends.

Police said Keys responded back and the driver turned around.

"Mr. Keys then approached the vehicle, exchanged words through an open window and punched a passenger once," Tucson Police Chief Chris Magnus said.

Police said he was then shot several times at close range.

Keys was pronounced dead at the scene.

Police said the teen arrested on Thursday was believed to be the driver, while one of the two arrested Friday was the shooter and the other was a "passenger whose actions contributed to the shooting."

Online court records didn't indicate whether the three arrested teens had defense lawyers who could comment on their behalf.

Authorities are still searching for the suspects' vehicle.

"There is no good ending to a homicide because there is no way to bring the victim back, but we are dedicated to bringing the suspects in this case to justice," Magnus said. "We hope our work brings some relief to the friends and family of this talented young man who had so much to look forward to."

The Lower Moreland community has been remembering Keys, a star player on the high school basketball and football teams, since his death was announced.

"We are stunned, saddened, and heartbroken to hear of the tragic and sudden loss of 2019 graduate Forrest Keys.

Forrest was an integral part of our football and basketball programs during his time here at Lower Moreland. It was never about stats with Forrest though. It was about his attitude, his work ethic, his team first attitude, and finally his smile that could light up a gym.

Forrest was a kind and humble human being who made our community a better place. He left a lasting impact on many of his teammates, friends, teachers, coaches, and administrators in our school community. Our thoughts and prayers go out to the Keys family at this difficult time.

Truly a great young man. Taken too soon. So much love and prayers to the Keys family. pic.twitter.com/eBiuj2w2wj

On Facebook, Lower Moreland Head Football Coach Justin Beck said when he got the coaching job, he told his wife that he needed Keys on his team because the teenager was "the kind of guy who would walk through fire for your friends."

Read Coach Beck's message:
"I love you so much Forrest and I miss you so badly already. What you did for our program and what you did for me personally I could never thank you enough for. You were the most talented and toughest kid I ever got the pleasure of coaching. But you were so much more than that to me. When I got the head coaching job I said to my wife we needed you on the team because you're the kind of guy who would walk through fire for your friends. That doesn't do you justice. Whenever our team was in trouble and we had to go through that fire, you put us all on your back and carried us through it. The world is a smaller and lesser place without you in it. To me, you're family, and this is going to hurt for a long time."

Many thanks to @joubroulis for sending this over:
Forrest Keys (23) with a great pass that set up a basket against Pennsbury during the 2018-19 basketball season
Lower Moreland won the BAL and District I 4A titles and made the state semifinals that year pic.twitter.com/38nnp7ucck

A few videos courtesy of @LMLionsFootball @CPeppelman finds Keys and he does the rest for a touchdown during their junior year pic.twitter.com/2LIdNYjKvp

Some of the football highlights were provided by Keys' former quarterback Cole Peppelman.

Former teammate Brock Landes said, "Thinkin about all of the lives that he impacted. What you saw was always what you got w him and he'll always be remembered that way. There's no one that Forrest couldn't make happy, it was always love w him. This put pain on everybody but it's our responsibility to live for him."

Thinkin about all of the lives that he impacted. What you saw was always what you got w him and he’ll always be remembered that way. There’s no one that Forrest couldn’t make happy, it was always love w him. This put pain on everybody but it’s our responsibility to live for him. https://t.co/EcOsmW6QiA

University of Arizona President Robert C. Robbins said the university is in touch with the Keys family.

"This has been a very devastating week at the University of Arizona with the loss of a beautiful and young man Forrest Keys," Robbins said. "(He) was a true leader and a charismatic figure on our campus. I too hope for his family, his friends, and our university community that this is a first step on the pathway to having justice for a senseless loss of a beautiful life."