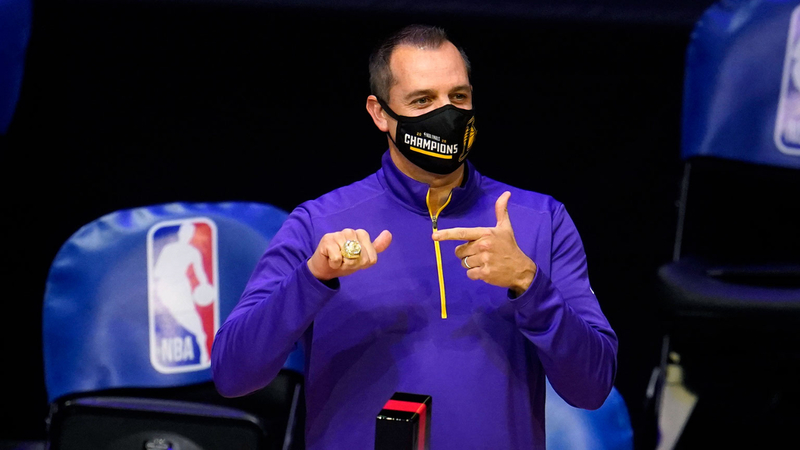 "Gotta represent Philly," Vogel said as he tugged on his grey Rocky shirt that read, 'Philadelphia's Own' during a recent interview.

Vogel has not forgotten where he has come from, Philadelphia and down the shore.

The Wildwood Crest native and 1991 Wildwood High School grad led the Lakers to the NBA title last year in his first season.

"In South Jersey and Philadelphia, growing up there's only three teams; Lakers, Celtics and Sixers. Having been able to work for all three and win a championship with the Lakers is a dream come true," Vogel said.

Vogel has been dreaming of this since he was a kid. His life has revolved around basketball. He was the starting point guard at Wildwood where his number 22 is now retired.

Vogel has spent more than 20 years in the NBA, starting as an assistant with the Celtics and then with the Sixers. He's been a head coach in Indiana, Orlando and now LA.

His family is proud, especially his father who doesn't hold back on telling his son about his favorite game.

"I still remember my dad telling me that game six, when we won the championship (vs Jimmy Butler and the Miami Heat) is the greatest game he's ever watched in his whole life," Vogel recalls.

Vogel credits his parents for helping shape him into the person he is today, along with a traumatic experience. In 1990 as a 17-year-old his house caught fire, they lost everything.

"The fire, every time you face adversity in your life, it helps you deal with it the next time. I do think it helped prepare me," said Vogel.

Vogel has been preparing to be a coach for as long as he can remember. He loved playing ball and perfecting trick shots as a kid.

As a 10-year-old in 1986, he appeared on the David Letterman show, as part of Letterman's long running segment, 'Stupid Human Tricks.'

Vogel spun a basketball on a toothbrush as he brushed his teeth.

Letterman got a kick out of it then and so have his current and former players who have come across the video on YouTube.

Sixers guard Danny Green, who played for Vogel and the Lakers last season, says they came across that video last year.

"To see him look exactly the same and have that passion for basketball, it shows why he's successful and good at what he does," said Green.

There's no question he's good at what he does and he's also considered a players coach. Lakers star Anthony Davis has joked with Vogel that he's the best looking coach in the NBA as Vogel looked on at his interview with Lakers media members.

Vogel has not only been celebrated in Los Angeles but also back home. He received over 300 texts from family and friends after winning the championship in the Orlando bubble this past summer.

Vogel has also been celebrated at his high school. In 2013, Wildwood High school honored him and retired his number 22 jersey when he was then coaching the Indiana Pacers.

Vogel tries to get home every summer to see his parents, family and high school friends, but he admits that it's been tough since he moved to Los Angeles because the NBA season was extended due to the pandemic.