'There needs to be a state of emergency': Philadelphia suffers 99th homicide of 2022

"I see a lot of people who have lost hope," said Sister Taleah Taylor.
WPVI
By Maggie Kent and 6abc Digital Staff 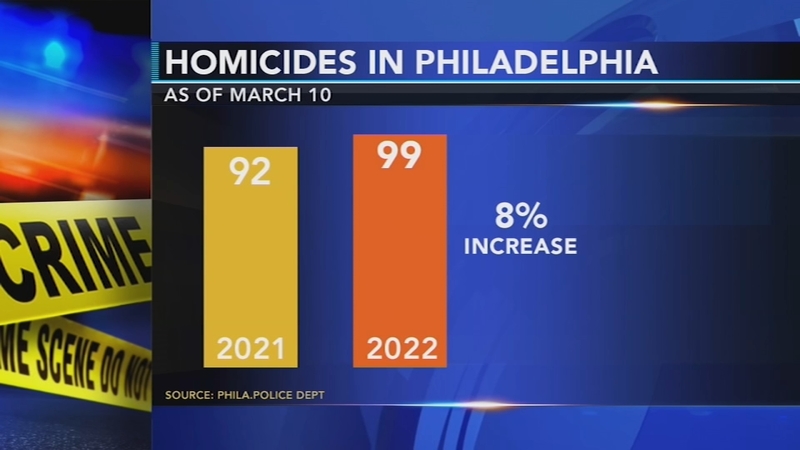 This year, thus far, the homicide rate is up again, by 8%.

A shooting in a Southwest Philadelphia apartment claimed the life of a 61-year-old man Wednesday night.

His death marked the 99th homicide in Philadelphia this year.

The feeling of desperation was even felt through the anti-violence advocacy community.

"They're just numbers to them. I see a lot of people who have lost hope. They lost hope, they're tired, they don't believe in anybody anymore," said Sister Taleah Taylor, president of City of Dreams Coalition.

"There needs to be a state of emergency. We need to shut our streets down," she said.

The Mayor's Office released this statement:

"The fact that our city has lost nearly 100 souls already this year pains me to my core. As mayor, my number one priority is to keep people safe and protect our residents.

The surge in gun violence that we've seen across the nation-and here in Philadelphia-is heartbreaking, it's maddening, and it makes me as outraged as everyone else.

Our administration, in partnership with all of our local and federal law enforcement agencies, continues to work relentlessly to reduce violence and create safer communities and a more just city for everyone.

Over the past year, the City has acted swiftly, investing in anti-violence initiatives that both address the immediate crisis and tackle the systemic, root causes of violence.

"I can't reinforce enough how senseless this loss of life is. We as a city and a society must do everything we can to remind our young people-through our words and our actions-that they are valued, that they are important, and that their lives matter.

If you have a young person in your life, I urge you to reach out to them. It's on all of us to look out for our city's young people.

This year, we plan to expand our Group Violence Intervention initiative and Community Crisis Intervention Program among other key anti-violence efforts underway.

The Police Department is making significant arrests and taking a record number of illegal firearms off our streets, but they need the public's help to solve crimes.

I urge anyone with information about heinous acts of violence to report it anonymously to 215-686-TIPS so we can prevent the senseless shootings that are tearing our communities apart."