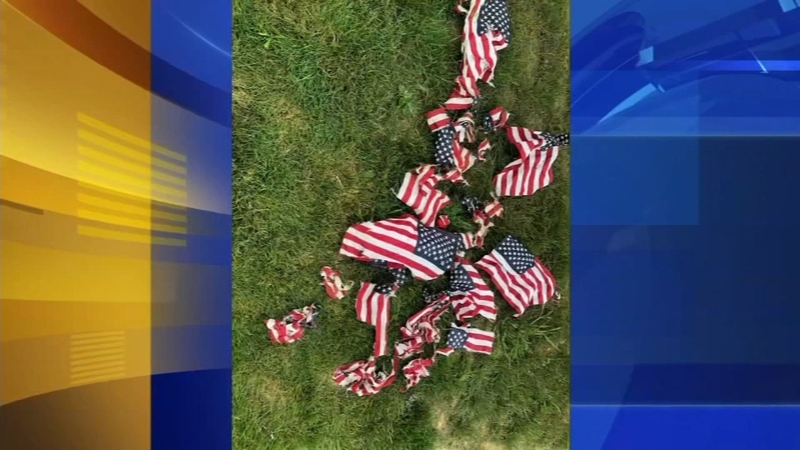 HATBORO, Pa. (WPVI) -- Dozens of small flags honoring loved ones were mowed down at a cemetery in Hatboro, Pa.

It all started with photos that were shared on Facebook by Montco News Feed.

The initial poster saying this is how the landscaping crew at the cemetery, quote, "honors our flags and veterans."

He termed it "unacceptable," and manager Wayne Sands did not dispute that opinion.
"A number of them were shredded like when they get sucked up under a mower deck and spit out. Some were just knocked over," said Sands.

A meeting was held Wednesday between the cemetery and the firm that does the mowing, BrightView Landscape Services.

When asked if he thinks it was one of his crews that was responsible, Furman Miles of BrightView said, "Probably. Our crews do work here but as I said I don't have enough information to share with you."

"Thought the best thing to do was end it and they seemed to understand it," said Sands.

The 23-acre cemetery has been a fixture here since the 19th century. Sands says he understands what happened touched a nerve with many in this community.

"The one thing I can do is we're going to replace everything, flag-wise," he said. Sands said it could be a challenge because not every veteran's grave is marked as such, but an effort would be made.

Officials with both the cemetery and BrightView repeatedly thanked the veteran who sounded the alarm.
BrightView said it would provide the replacement flags and said it is continuing to investigate the matter as to why it occurred and to ensure it will not happen again.