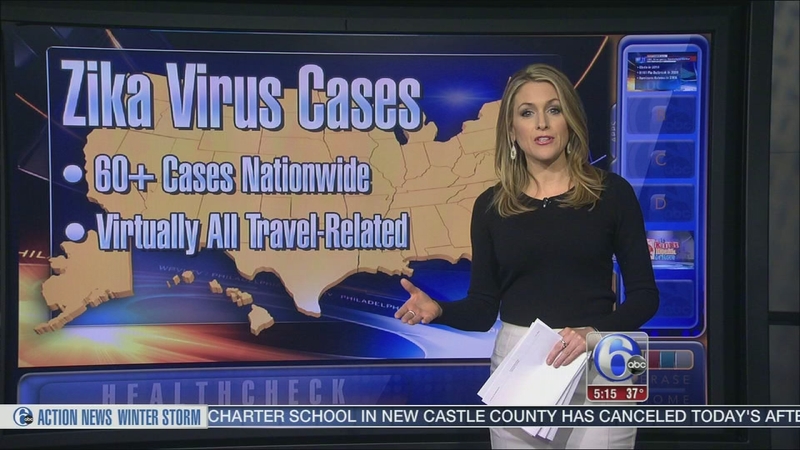 PHILADELPHIA -- Health officials in both Pennsylvania and Delaware have announced cases of the Zika virus.

The cases are the first for both states, and both were announced on Tuesday afternoon.

The Pennsylvania Department of Health said two female residents, who recently traveled to areas affected by the ongoing outbreak of the disease, contracted the virus.

No further information is being released to protect their privacy, officials said.

"While we are concerned about the health of these individuals and any Pennsylvanian who may be exposed to Zika virus, we want to emphasize that these cases pose no threat to the public," said Secretary of Health Dr. Karen Murphy said in a statement.

Meanwhile, the Delaware Division of Public Health said there is one patient, an adult female. The virus is travel-related and pregnancy is not an issue, officials said.

According to the Pennsylvania Department of Health:

The current Zika outbreak began in May 2015 and is occurring in many countries. Zika is a generally mild illness that is spread primarily through the bite of an infected mosquito. In rare cases it has been known to also spread from mother to child, as well as through blood transfusion. of Zika virus is possible, and men who have traveled to affected areas should take steps to prevent the spread of Zika virus through sexual contact.

The majority of individuals infected with the Zika virus have no symptoms. When symptoms occur, they are usually mild and last for between two and seven days and include:
Fever;
Rash;
Muscle/joint pain;
Conjunctivitis (red eyes); and
Headache.

No vaccine or medications are yet available to prevent or treat Zika virus. Symptoms are treated with plenty of rest, fluids and medicine to relieve fever and pain. Severe illness requiring hospitalization is uncommon, and deaths from Zika virus are rare.
Until more is known, the CDC recommends that all pregnant women consider postponing travel to areas where Zika virus transmission is ongoing. Women who are pregnant or planning to become pregnant and must travel to these areas should first consult with their health care provider and take extra care to protect themselves from mosquito bites when traveling to an area known to have Zika.
Related topics:
health & fitnesshealthcheckpennsylvania newsdelaware newszika virus
More Videos
From CNN Newsource affiliates
TOP STORIES