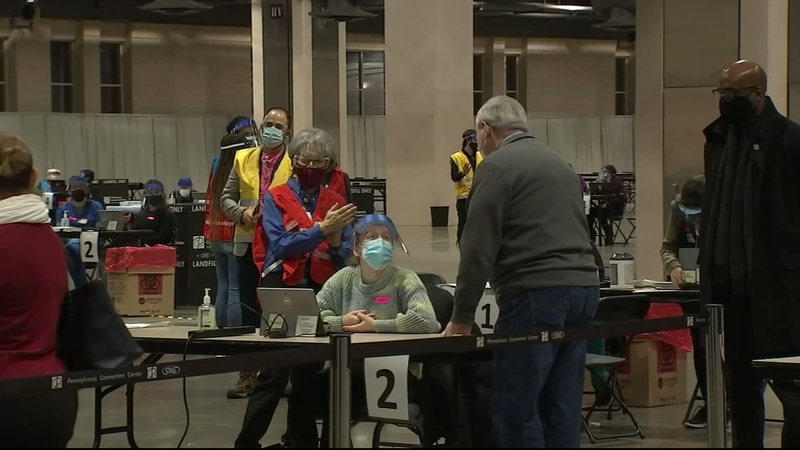 More than 2,500 people are expected to eventually receive the second dose of the vaccine this week at the Pennsylvania Convention Center.

City officials first opened the clinic last month while it was being run in partnership with the Philly Fighting COVID organization.

"I was wondering if I was going to get my second one on time," said Wayne Grimes, a healthcare worker who says he's relieved after getting his second dose.

Philly Fighting COVID had already begun administering the first dose to thousands of people, but now the health department has taken over the job of running the site.

Kenney admitted that there were missteps in planning.

"Philly Fighting COVID was a mistake and it's been corrected and we're moving on," Kenney said.

The mayor is defending Dr. Farley as local lawmakers call for the health commissioner to resign.

"I think he's doing a good job. I think the health department has done a terrific job in keeping this pandemic at bay and I'm happy with the work," Kenney said.

Farley said he doesn't plan on stepping down unless the mayor wants him to leave and is now reassuring the public that the city has a plan in place to vaccinate thousands more under his leadership.

"I understand why people are concerned about what happened here. I think that I have something still to contribute. We have an epidemic to fight. We have a lot of people we need to vaccinate," Farley said.

Additional clinics are on the way in Philadelphia. Officials said six mass vaccination clinics will open on February 22, the last Monday of the month.

The goal is to vaccinate roughly 500 people per day, which includes those who are over 75 along with additional frontline first responders.

"We will be inviting people based on those who have gone to our vaccine interest sign-up form who meet the phase 1B criteria. We will be emailing and calling those people to sign up for appointments between now and February 22," Farley said.

In total, more than 105,300 people have been vaccinated with the first dose of the vaccine in Philadelphia.

The mayor was not completely ruling out drive-through vaccination clinics, but noting those without vehicles could be shut out.

"The problem with mass drive-throughs is that people who don't have cars can't do it," said Kenney. "The other issue with mass drive through, similar to testing, like down at the sports complex, is that we had people coming from New Jersey and the counties and other places."

Pennsylvania and Philadelphia each get separate vaccine allotments from the federal government.

The state health department is looking forward to redistributing up to 36% of its Moderna vaccines as President Biden announced a plan to directly supply vaccine to pharmacies.

"This will hopefully mean that we can start to send those doses to parts of our plan to vaccinate more eligible Pennsylvanians," said Lindsey Mauldin, Pennsylvania Health Dept Senior Advisor.

The city set up a portal for those who want to express their interest in receiving the COVID-19 vaccine at https://www.phila.gov/vaccineinterest.