Hitchhiking robot's cross-country trip in US ends in Philly 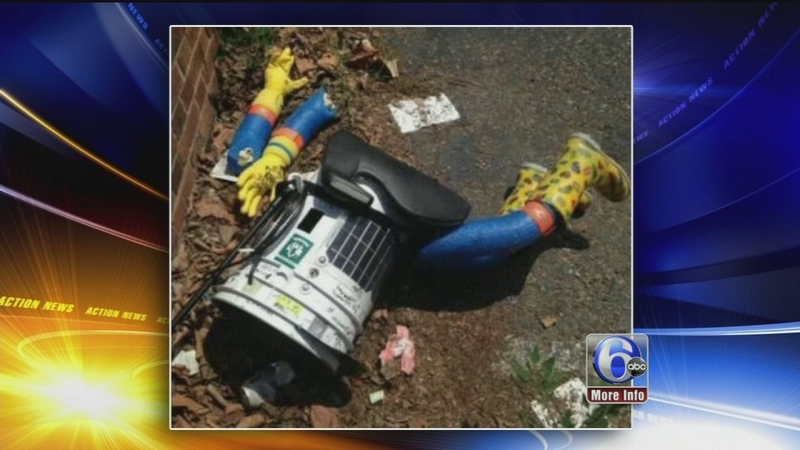 PHILADELPHIA (WPVI) -- A hitchhiking robot that captured the hearts of fans worldwide met its demise in Philadelphia.

The Canadian researchers who created hitchBOT as a social experiment told The Associated Press that someone in the city damaged the robot beyond repair early Saturday, ending its first American tour after about two weeks.

"Sadly, sadly it's come to an end," said Frauke Zeller, one of its co-creators.

HitchBOT rests on the wall along the first base line before a baseball game at Fenway Park between the Boston Red Sox and Detroit Tigers in Boston, Friday, July 24, 2015.

The kid-size robot set out to travel cross-country after successfully hitchhiking across Canada in 26 days last year and parts of Europe. It's immobile on its own, relying on the kindness of strangers. Those who picked it up often passed it to other travelers or left it where others might notice it.

It started in Marblehead, Massachusetts, on July 17 with its thumb raised skyward, a grin on its digital face and tape wrapped around its cylindrical head that read "San Francisco or bust."

The robot bounced around the Boston area and was briefly taken to sea. One day, it took in a Red Sox game, checking off one of the items on the bucket list created for it. But hitchBOT never made it off the East Coast.

My trip must come to an end for now, but my love for humans will never fade. Thanks friends: http://t.co/DabYmi6OxH pic.twitter.com/sJPVSxeawg

The creators were sent an image of the vandalized robot Saturday but couldn't track its location because the battery is dead. They said they don't know who destroyed it or why.

The robot was designed to be a talking travel companion and could toss out factoids and carry limited conversation. A GPS in the robot tracked its location, and a camera randomly snapped photos about every 20 minutes to document its travels.

During past travels, the robot attended a comic convention and a wedding, and it had its portrait painted in the Netherlands. It once spent a week with a heavy metal band.

With the robot destroyed, Zeller said, she was most concerned about children who loved hitchBOT and followed it on social media. Her team doesn't plan to release the last photo of it to protect young fans who might be distraught.

"I hope that people won't be too disappointed, too sad," she said.

The creators posted the following message Sunday on a website devoted to the project:

hitchBOT's trip came to an end last night in Philadelphia after having spent a little over two weeks hitchhiking and visiting sites in Boston, Salem, Gloucester, Marblehead, and New York City. Unfortunately, hitchBOT was vandalized overnight in Philadelphia; sometimes bad things happen to good robots. We know that many of hitchBOT's fans will be disappointed, but we want them to be assured that this great experiment is not over. For now we will focus on the question "what can be learned from this?" and explore future adventures for robots and humans.

We have no interest in pressing charges or finding the people who vandalized hitchBOT; we wish to remember the good times, and we encourage hitchBOT's friends and fans to do the same.

The group said more information on the future of the project would be available August 5th.

Meanwhile, a group of local engineers have taken up the task of rebuilding hitchBOT.

Since news of the hitchhiking robot's untimely demise, a group of local techies have launched a KickStarter aimed at rebuilding hitchBOT, and they've already raised more than $1,900 - well north of it's $1,200 goal.

To learn more about the local effort to rebuild hitchBOT, visit the Philadelphia Rebuilds HitchBOT KickStarter.