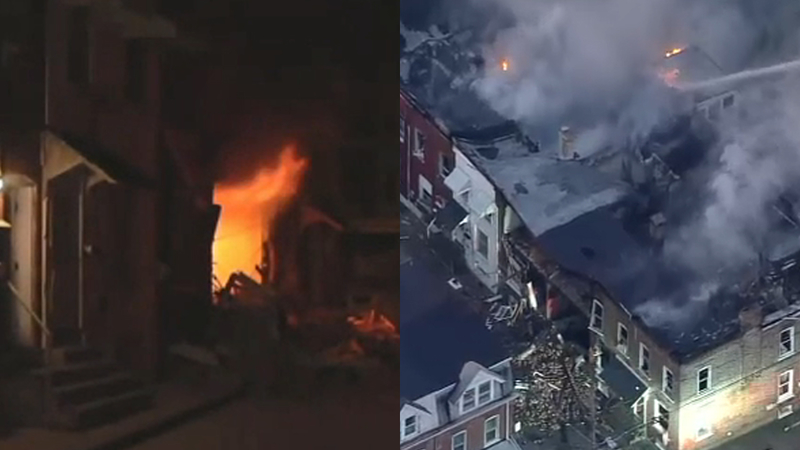 Fire spreads to surrounding homes after house explodes in Allentown

Neighbors called 911 to report a home on the 300 block of West Green Street had exploded around 3:20 a.m.

When fire crews arrived, they found heavy flames shooting from a home around the corner on the 700 block of North Fountain Street.

"I heard something like a truck, something falling out of a truck, and I see all the neighbors looking out and you see the flames come out," said neighbor Sid McKenzie.

A resident of Fountain Street in Allentown captures the moments after a house explodes and collapses, October 20, 2019

"We felt the shake and everything when the explosion went. I came out got my kids, got my step kids ready and we went outside," said resident Jonatan Villanueva.

"I thought my house would catch on fire cause I got a tree in the back," he added.

Other viewer video captured the panic of some residents shortly after the fire started.

"Get mom up. Get out of the house. There's a fire, get up!" could be heard in the recording.

The fire continued to burn for several hours. Flames could be seen shooting through the thick black smoke, billowing above the homes as firefighters worked to contain the blaze.

The Red Cross says they are providing emergency assistance for a dozen displaced families, about 44 people. Eight of those families were affected by the fire. An additional four families are temporarily displaced during demolition that is currently taking place.

Officials said one person who was left unaccounted for after the evacuations was located safely around 9:30 a.m.

UPDATE: The unaccounted person from this morning's incident has been located safely. The investigation continues into the cause and origin of this possible explosion. There are no ongoing safety concerns. Stay clear of this area #AllentownPolice

A firefighter suffered a shoulder injury while working to contain the blaze.

Officials said the area from Tilghman to Washington streets between 8th and 10th streets will be closed to pedestrians and traffic as the investigation continues.