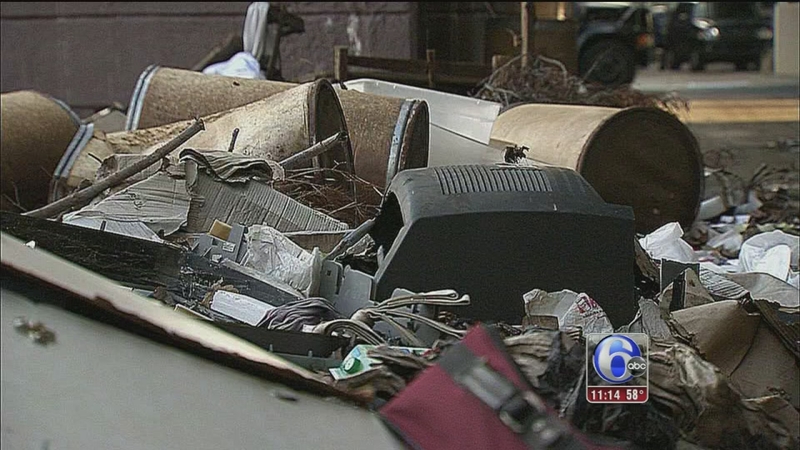 PHILADELPHIA (WPVI) -- Construction is booming in Philadelphia, but the problem is not all builders or residents are playing by the rules.

Covert cameras set up across the city are catching this mounting problem in action and we're on the dumpers' trail to find out why they're trashing your neighborhoods.

In the middle of Kensington, there's a growth spurt, cleaning up this once drug infested neighborhood, turning it into the next up-and-coming hot community.

But at its center, and on side streets, it's turned into the Wild West of illegal dumping.

Philadelphia and the Streets Department has a total of 16 surveillance cameras set up across the city.

"We've seen everything from A to Z. Whatever you can imagine, we find it dumped on the street," Keith Warren, Chief of Operations for the Sanitation Division in the Streets Department, said.

It's part of their enforcement efforts, including undercover stings to catch the offenders in the act.

"The chronic dumpers they keep up with our enforcement measures and they adjust their dumping strategies," Warren said.

Warren estimates about 50% of the junk is from construction debris, the other half is residents everyday trash.

And it's costing, you, the taxpayers, $3-million a year for the cleanup.

Sanitation enforcement officers have the dirty job of inspecting the heaps left on the roadside looking for clues that could lead to $300 littering fines.

The Streets Department has created a list of the 12 most common dump-sites across the city, from the Southwest, to Northeast, and areas like Point Breeze. They call it the Dirty Dozen.

When we tracked down the owner, he agreed to clean up the debris that his subcontractor illegally dumped.

Back in Kensington, a sign left in an abandoned junk lot led us to a local hair studio.

A very upset owner pointed us to the company she says she paid to replace and legally discard the sign.

Cali Signs owner Carlos Mina says he has fired the contractor responsible, and he personally went back to the lot and picked up the discarded sign.

MEB Plumbing, who says it was his partner who dumped, was issued two tickets for a total of $600, and says they are going to retrieve their dumped debris.

Casimir's Masonry was also fined $300 for illegally dumping on a York Street lot.

The owner, by phone, told us he thought it was legal.

The Streets Department says the majority of things residents are dumping are things that would be picked up on a normal trash day, or could be dropped off. They also say as quickly as they clean these junk lots, they fill back up with trash.

If you're caught dumping, you could face a fine and possibly foot the cost for the cleanup.