Jersey City shooting: What we know about victims inside Jewish market 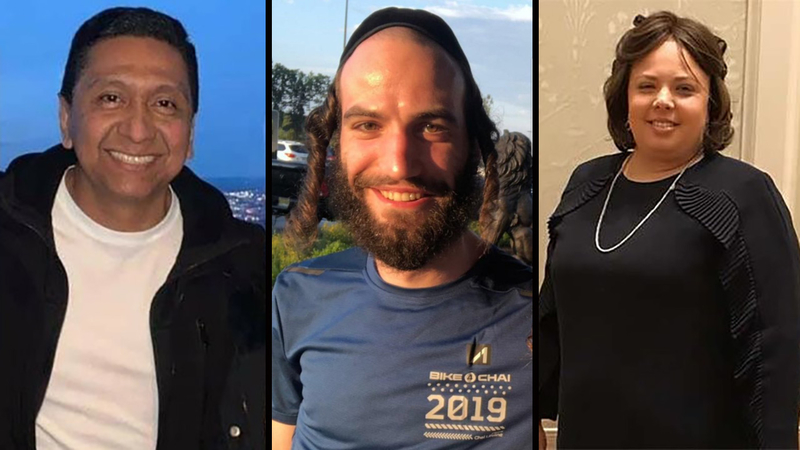 Jersey City victims: What we know about those killed inside market

JERSEY CITY, New Jersey -- Three people, including workers and a customer, were killed inside a Jewish grocery store in Jersey City Tuesday as police converged on the scene ahead of a furious firefight.

The victims in the supermarket were identified as 24-year-old Moshe Deutsch, 49-year-old Douglas Miguel Rodriguez, and 31-year-old Mindy Ferencz, who owned the store with her husband.

Chabad Rabbi Moshe Schapiro, who shops at the store and attends a synagogue next door, said he spoke with the owner Moishe Ferencz.

"He told me he had just walked out of the store into the synagogue not five feet away just before this happened, and then he couldn't get back for hours," Schapiro said. "His wife was inside the store. He said, 'I hope my wife is safe.'"

Rodriguez, who leaves behind a wife and 11-year-old daughter, had worked at the supermarket for nearly a year.

RELATED: The scene on the streets of Jersey City captured in video and photos

Deutsch, who was a customer, also volunteered with Chai Lifeline, a community-based program for children with cancer that has become a leading health support network for seriously ill children, their families, and their communities, according to CEO Rabbi Simcha Scholar.

"Moshe was a dedicated Chai Lifeline volunteer who always looked for opportunities to help others," he said. "This is a devastating loss for our entire community. Our thoughts are with all those impacted by this senseless act of violence. We encourage anyone in need to contact our 24-hour crisis hotline at 855-3-CRISIS or email crisis@chailifeline.org."

Deutsch was dedicated to studying his Jewish faith in a yeshiva he helped to establish, and he was known as a go-to person.

"Moshe himself studied and found time to help his peers from his yeshiva," said Rabbi David Niederman, president of the United Jewish Organizations of Williamsburg and North Brooklyn. "He was one of the organizers of a major food drive that 2,000 families get every year. This is Moshe."

Niederman said the Ferencz family moved to Jersey City to make a life for themselves and others.

"As an example, I'll go there, I'll open a grocery store so that families could go and shop locally and therefore growing the community," he said. "She was a lady full of love for others, and unfortunately, her life was cut so short."

Funerals for both Deutsch and Ferencz were held Wednesday, and the NYPD offered security details as thousands of mourners filled the streets and sidewalks around the sites.

NOW: funeral for #MosheDeutsch, one of #JerseyCity victims. He was 24 and volunteered to help kids with cancer. Thousands filling #Williamsburg street listening to family member sobbing in Yiddish, over a loudspeaker. #abc7ny pic.twitter.com/RF44fcj3CB

This says everything you need to know about the pain this community in #JerseyCity is feeling after the kosher supermarket 31-year-old Mindy Ferencz owned with her husband was targeted and shot up. Hundreds turned out to mourn her loss. #JerseyCityShooting #jerseycityshootout pic.twitter.com/CR2YqW5IgT

Family and friends remembered Deutsch at his funeral in Williamsburg, Brooklyn.

"Whenever I saw him, he was a happy, happy, happy child, always with a smile," friend Shulem Freund said.

They also spoke of his volunteer work to help kids with cancer.

"He was just everything to these kids," friend Abraham Glausius said. "These kids loved him, he helped them, danced with them and he was everything for them. And he's not here anymore."

A Jersey City police officer was also killed in a nearby cemetery. He was identified as Detective Joseph Seals, a husband and father of five who had been with the department since 2006.