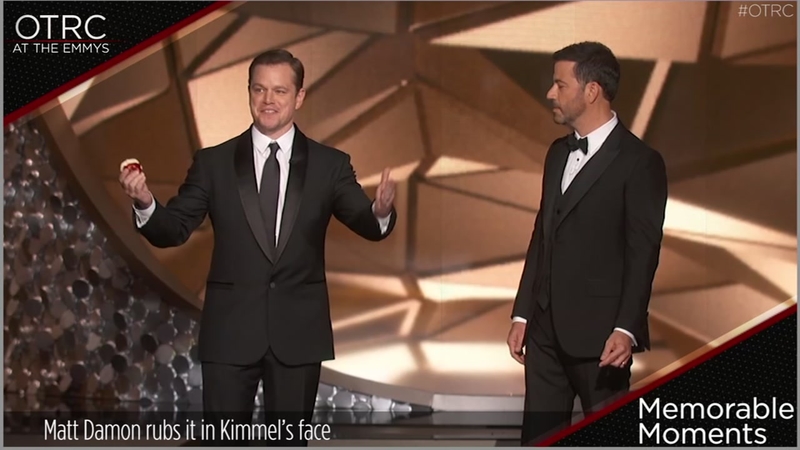 Emmy Awards host Jimmy Kimmel had some choice words for actress Dame Maggie Smith, who seldom appears at the awards show to accept her statuette.

During his opening monologue, Kimmel threatened to revoke all of her Emmys if she did not appear at the Sept. 18 show should she win.

As it turns out, she won for outstanding supporting actress in a drama series for her role in Downtown Abbey, and Kimmel stepped in to claim her award.

"We're not mailing this to her. Maggie if you want this, it will be in the lost and found," Kimmel said, walking off stage with her award.

Shortly after John Oliver took home the award for outstanding variety series category for his show Last Week Tonight, Damon sauntered on stage with an apple in his hand.

Damon began mocking Kimmel for not winning in the category and even gave his frienemy a hug. After a few back-and-forth quips to one another, Damon turned to leave the stage with some saucy parting words.

"Oh hey Jimmy, tell your mom I like them apples," he said.

Here are some of our favorite looks from the Emmys red carpet.

"Mr. Robot" star Rami Malek is shocked after accepting his first Emmy Award for his lead role in the show.

Mr. Robot star Rami Malek won his first Emmy for his role in the hit show and couldn't contain his surprise.

While standing stunned in a fitted white and black suit, the actor thanked everyone he could think of for helping him reach such a pivotal moment in his career.

In his speech, he honored all of the Elliots in the world and said "there's a little bit of Elliot in all of us."

Jimmy Kimmel enlisted his mother to make 7,000 peanut butter and jelly sandwiches for everyone who attended the Emmys.

Not only did his mother make sandwiches, she included a heartwarming note inside that reminded each person that their mother loves them.

Stranger Things stars Gaten Matarazzo, Millie Bobby Brown and Caleb McLaughlin dressed up as their characters from the Netflix series and rode their bikes up and down the aisles, passing out the sandwiches in brown paper bags.