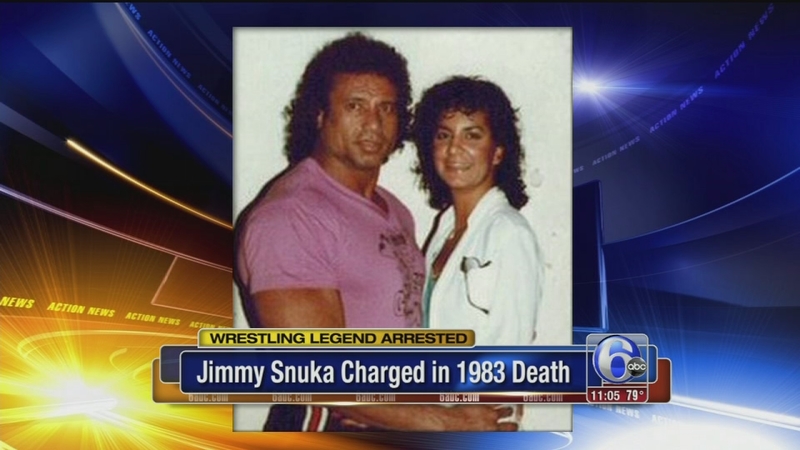 ALLENTOWN, Pa. -- Former professional wrestling star Jimmy "Superfly" Snuka was charged Tuesday with third-degree murder and involuntary manslaughter in the death of his girlfriend more than three decades ago.

Prosecutors in Lehigh County announced the results of a grand jury investigation into the death of Nancy Argentino, 23, of New York.

Snuka, who had been at a World Wrestling Federation taping at the Allentown Fairgrounds, told police shortly after Argentino's death that he had returned to the couple's Whitehall Township hotel room to find her unresponsive in bed. She was pronounced dead at a hospital several hours later.

An autopsy determined she died of traumatic brain injuries and had more than three dozen cuts and bruises, and concluded her injuries were consistent with being hit with a stationary object. At the time, forensic pathologist Isidore Mihalakis wrote that the case should be investigated as a homicide until proven otherwise, according to a grand jury report released Tuesday. But the investigation went cold.

A June 2013 investigation by The Morning Call of Allentown raised questions about the case. Lehigh County District Attorney Jim Martin told the paper last year that Argentino's sisters approached him after the story ran, prompting him to give the case another look.

The grand jury's report said Snuka had provided more than a half-dozen shifting accounts of Argentino's injuries, at first telling paramedics he hit her during an argument outside their hotel room and that she struck her head on concrete, then claiming to police she slipped and fell during a bathroom break on their way to the hotel.

The grand jury also said it heard evidence that Snuka beat Argentino in a hotel room in Syracuse, New York, in January 1983 - four months before her death - and repeatedly assaulted his wife, Sharon, in the fall of 1993.

Snuka, now 72 and living in Waterford Township, N.J., has long maintained his innocence, saying the episode had ruined his life.

"Many terrible things have been written about me hurting Nancy and being responsible for her death, but they are not true," he wrote in his 2012 autobiography. "This has been very hard on me and very hard on my family. To this day, I get nasty notes and threats. It hurts. I never hit Nancy or threatened her."

Argentino's sister, Louise Argentino-Upham, told The Morning Call that the charges came as a relief, especially the prospect that her mother, who turns 90 this year, may see justice in the case.

"I think that it's been a long road," Argentino-Upham said. "They did the right thing in face of all the evidence."

Nicknamed "Superfly," the Fiji native was known for diving from the ropes and even the top of steel cages in a career that spanned four decades. He was admitted into the World Wrestling Entertainment Hall of Fame in 1996, according to the organization's website.

WWE expresses its continued sympathy to the Argentino family for their loss. Ultimately this legal matter will be decided by our judicial system,

While Snuka has not performed regularly for WWE since 1992, he is currently under a non-wrestling 'legends' contract for the company.

WWE sent 6abc the following statement on Snuka's status: Jimmy Snuka is currently under a non-wrestling 'legends' contract, which is being reviewed in light of today's news.

Snuka was arraigned Tuesday afternoon and sent to Lehigh County Jail, but he was expected to post a portion of his $100,000 bail.

Argentino's family won a wrongful death lawsuit against Snuka in 1985.