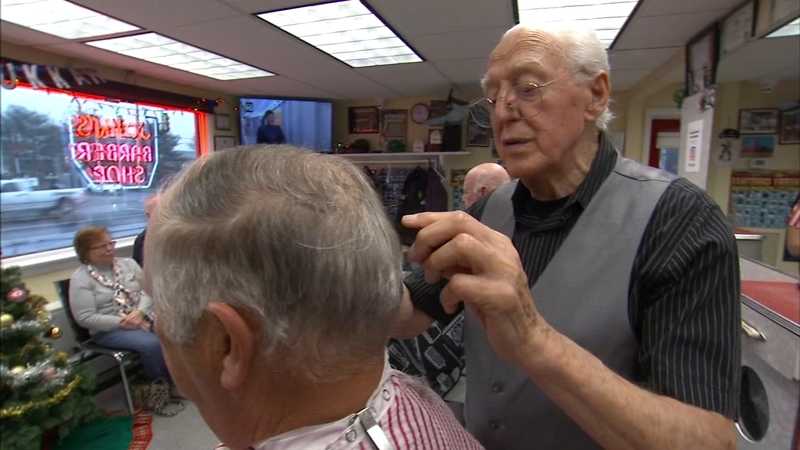 BENSALEM, Pennsylvania (WPVI) -- Some people might say hindsight is 20/20 when thinking about an old hairstyle now that the new year is underway, but an 88-year-old from Bensalem has been keeping generations of his clients looking good for over 65 years.

Romanian-born John Gutekunst knew exactly what he wanted to do when he came to America, earning his diploma from the Philadelphia Institute of Barbering.

"Well, then I got drafted and I spent two years in the military," he said.

He served in Korea with the U.S. Army in the tank division.

"And after I got out of the service, I opened my barber shop in 1954," said Gutekunst.

He's been keeping men in the Bensalem area looking sharp ever since. Many of his customers served as well.

"John's been cutting my hair since 1976. He has quite a following here," said Harper.

Gutekunst shows his appreciation for that. The walls of John's Barber Shop are adorned with pictures and memorabilia honoring local heroes.

The times have changed since he started barbering.

But his work ethic has stayed the same, still working five days a week.

He also has five women who work as barbers alongside him.

"But I couldn't get any man barbers no more, so I had to find actually hairdressers and teach them the barber business," said Gutekunst.

"Because it's a barbershop. It's a man's place to get a haircut. I've watched generations come back. His technique of barbering I feel is fading out and I'd love to make sure that it stays alive," said Kathleen Campion, manager of John's Barber Shop.