The show gives insight into who the artist was behind the work.
WPVI
By Bethany Owings 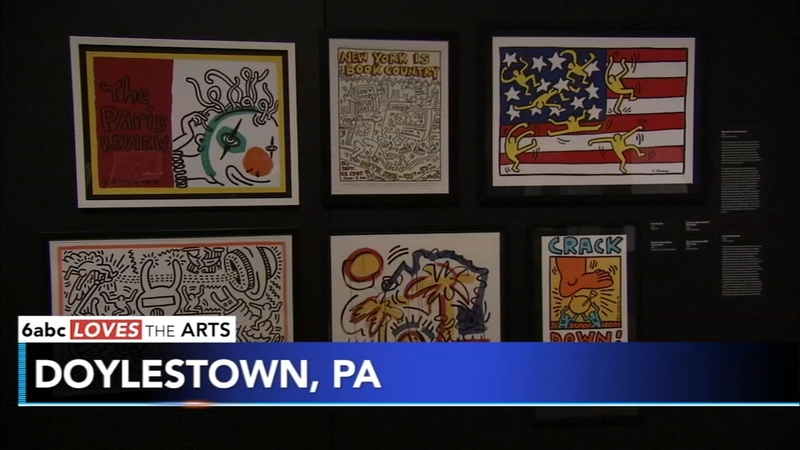 DOYLESTOWN, Pa. (WPVI) -- Looking for something for to do on the weekends?

Head to Doylestown, where you'll find rare works by local icon and artist Keith Haring on display. Karen Rogers takes us to the James A. Michener Art Museum, in this week's 6abc Loves the Arts.

"Keith was well-known as being a POP artist of the 1980's," says Joshua Lessard, Director of Exhibition at Michener Art Museum.

The collection spans his 10-year career and highlights the global impact he had.

"This exhibition is laid out into 12 thematic sections. It works its way through his early work, it moves through his gallery career and sort of the Pop Shop commercial work, as well as his more personal collaborations," says Lessard.

Haring was born in Reading, Pennsylvania and raised in Kutztown.

"A local hero," says Lessard, "We actually have many of his yearbooks that show him in an art class in high school."

The show gives insight into who the artist was behind the work.

"We include many of his own personal stories and personal quotations," says Lessard.

Haring went on to live and study in the Big Apple to be part of the broader art scene.

"He began doing sort of the street artwork on the subway system," says Lessard.

And two of those rare street art drawings are on display.

And friendships with artists like Jean-Michel Basquiat, Kenny Scharf and Madonna led to projects and collaborations.

Haring also used his canvas as a medium for social justice and activism.

And he often tackled issues in the geopolitical square still relevant today.

"All the issues of his day are ones that we are struggling with," says Lessard, "in a revived sense today."

Some of his works relate to H-I-V AIDS activism, a disease that ultimately claimed his life.

By revisiting Haring's colorful legacy, the museum's goal is to inspire new generations.

And they hope to draw in fresh dialogue around important issues.