Kylie Jenner is the youngest ever self-made billionaire, according to Forbes 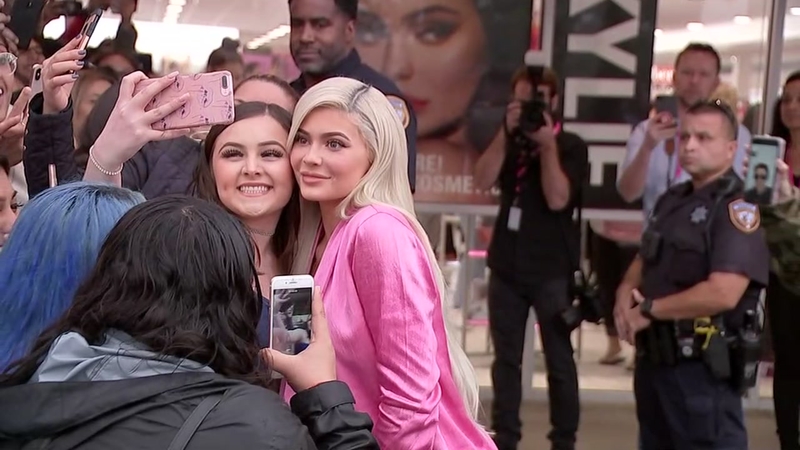 Beauty and social media icon Kylie Jenner can add one more accomplishment to her list, and it has to do with her net worth.

On Tuesday Forbes released its annual list ranking the world's billionaires by estimated wealth. Jenner is the youngest of the 2,153-member list.

Jenner is not just the youngest billionaire of the year. At 21, she is younger than Mark Zuckerberg was when he made his first billion at age 23. According to Forbes, she's now the youngest ever self-made billionaire.

"I didn't expect anything. I did not foresee the future," Jenner told Forbes. But she said the recognition "feels really good. That's a nice pat on the back."

The stat raised some eyebrows as social media users wondered about Forbes' definition of "self-made."

Okay, maybe I'm the one who's confused, but I thought "self-made" meant, like, done without the benefit of your family's wealth or empire ? pic.twitter.com/wRi2vC8Vmv

Did she work a random day job in the mall to save up a few grand to start her makeup line, which led to it becoming profitable and an investor coming on board? It’s not self made if you’re born with it.

Is it impressive what she’s done? Absolutely.
Should she have respect for it? 1000%.
Is she self-made? Abso-freakin-lutely NOT https://t.co/2MvT0zVJjI

This is not the first time the controversy around whether Jenner is "self-made" has been raised. Last summer, Forbes got some pushback for featuring Jenner in its list of America's Richest Self-Made Women.

At the time, Forbes published an article explaining how they arrive at their definition. In it, they acknowledge that Jenner would not be where she was if not for her family.

"She comes from a wealthy, famous family. Her half-sister Kim Kardashian West helped make her famous. Her mother helped build her business," the article reads.

Forbes argues that Jenner is mostly self-made because she did not inherit her wealth. Using a scale with a 1 being someone whose wealth is 100% inherited and a 10 being someone who is 100% self-made such as Oprah Winfrey, Forbes gave Jenner a 7.

Forbes attributes Jenner's wealth to her beauty empire, Kylie Cosmetics. Launched in 2015, the brand was initially only sold online and at the occassional pop-up store.

Late last year, Jenner took her iconic lip kits to brick-and-mortar stores as she launched her partnership with Ulta at an event in Houston that had fans lined up.

The distribution deal resulted in $54.5 million worth of products being sold in six weeks, Forbes reports, which helped propel Jenner onto the billionaires list.

Including Jenner, there are only eight billionaires in the world who have not yet seen their 30th birthday, according to Forbes' list.

The second youngest is Norwiegen heiress Alexandra Andresen, who is 22 and is worth about $1.4 billion. Aside from Jenner, the only other self-made billionaires in the world under the age of 30, according to Forbes' definition, are two tech entrepreneurs: SnapChat co-founder Evan Spiegel and Stripe co-founder John Collison. Both men are 28 years old, and each are worth an estimated $2.1 billion.

With an estimated net worth right around $1 billion, Jenner still has a long way to go before she reaches Zuckerberg and the others at the top. More than a decade after first making the list, Zuckerberg is now in the top 10 with an estimated net worth of $62.3 billion. Amazon founder Jeff Bezos sits at the top with an estimated net worth of $131 billion.
Report a correction or typo
Related topics:
personal financecelebritybeautyamazonsocial mediakylie jennerkardashian familysnapchat
KYLIE JENNER
Kylie Jenner 'likely forged' tax return, misled net worth, Forbes claims
'World record egg' cracks the internet
How your favorite celebrities dressed up for Halloween 2018
Forbes says Kylie Jenner set to be youngest 'self-made' billionaire; backlash ensues
TOP STORIES
DA: Person shot, killed by officer after struggle in Malvern, Pa.
CDC advisory panel greenlights booster shots for children ages 5 to 11
FTC warning: Baby formula scammers are preying on parents
Delaware AG now investigating condemned Wilmington apartment complex
What is monkeypox? What to know after US confirms 1st 2022 case
Rihanna and A$AP Rocky welcome their first child
Eagles have a loaded roster, but will QB hold them back?
Show More
Delco bus driver accused of taking upskirt photos of students
Rise in brazen thefts force convenience stores to close
Blasian Solidarity unites Philly's Black, Asian communities for good
5 people shot in North Philadelphia near Temple University
Ford recalls SUVs due to engine fire risk
More TOP STORIES News