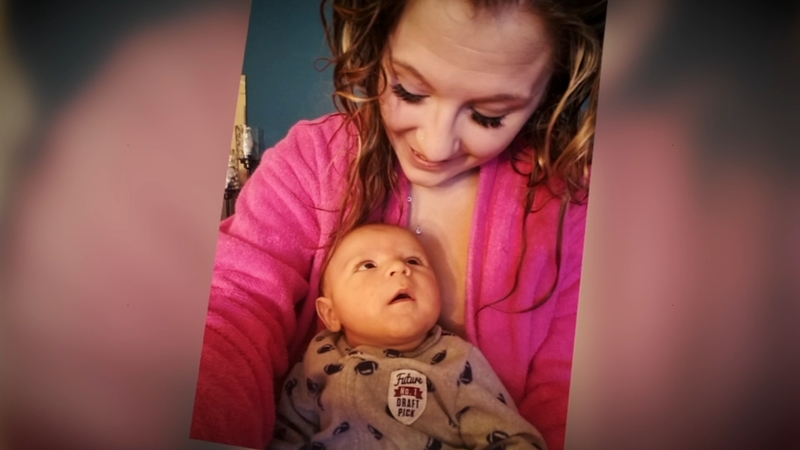 Many families assume when they buy a product designed for children or infants, it's been government approved and reviewed for safety. But, as WPVI-TV in Philadelphia found, that is simply not the case.

Lakin Harmon, a Pennsylvania mother, is suing Chicco U.S.A. after she claims her 3-month-old baby died in what she calls a defective product that is still on store shelves.

She talked exclusively to WPVI-TV in hopes that sharing her story will prompt a recall of the product and motivate legislators to fix what she calls a backward system.

Fisher-Price says it's recalling Ultra-Lite Day & Night Play Yards inclined sleeper accessory because babies can roll from their backs to their stomachs, risking injury or death.

"I've always been a hyper-vigilant mom," she told us. "I am always on top of everything and I never thought something like this would happen to us and it can happen to anybody."

But on May 3, 2017 the unimaginable happened. Lakin said that Cayson's dad, Jayme, put their son down for about 30 minutes in the Chicco infant napper.

"All I remember is him running up the stairs screaming," she said. "I took him out of his arms and put his chest to mine and got him on the floor downstairs and started CPR while Jayme called 911."

In a lawsuit, Cayson's parents allege the product is defective and dangerous and caused their son's death.

The family's attorney, Daniel Mann with Feldman Shepherd, said the napper caused Cayson's head to be at an incline.

"The children can get into a chin to chest position where their head is down and to the side where they could asphyxiate and die," said Mann.

The Consumer Product Safety Commission, the federal government agency responsible for product safety, has recalled five other inclined sleepers made by other companies, including 4.7 million Fisher-Price Rock 'n Plays.

"We know that 50 kids have given their lives to prove to the government, to the CPSC and to manufacturers that inclined sleepers are not safe," said Mann.

But the recalls happened only after reports of babies dying.

The agency has known about Cayson's death for at least five months. But many other inclined sleepers, including the Chicco Napper, still remain on store shelves.

Chicco U.S.A, which is headquartered in Lancaster, Pennsylvania, declined an on-camera interview.

In an emailed statement, the company told us, "Safety is always our top priority. To date, this is the only allegation we've heard about as it relates to our Playard nappers."

And in court papers, Chicco denied the product is defective and said it is not responsible for Cayson's death.

The vast majority of products have no mandated government safety standards in place, which means federal safety officials investigate only after children get hurt or die.

"We simply have to stop allowing companies to put them on the market using our children as guinea pigs," said Child Safety Advocate, Nancy Cowles with Kids in Danger. Cowles says the American system is backward.

"Products that infants sleep in need to be tested for safety before they're sold," she said.

The Consumer Product Safety Commission initially agreed to sit down for an on-camera interview, but after we submitted specific questions about the Chicco napper, the agency changed its mind.

In a statement, the CPSC said it is in transition. The agency also said it is working on mandatory safety requirements for inclined sleepers.

"When people's lives are on the line or their health and safety we do have to act faster," Rep. Rochester told WPVI.

Meanwhile, Lakin Harmon says there is no pain like losing a child and she hopes other families do not have to go through the heartbreak that her family has had to endure. She is also speaking out as she thinks about her 1-year-old daughter, Rylan, whom Cayson never got to meet.

"That's why I'm doing this interview, to bring light to that product and other products like it," she said.

WPVI learned it is really hard to bring light to potentially dangerous products. The CPSC refuses to release most records, even about existing recalls. A letter to the Troubleshooters claimed it would be "contrary to the public interest."

One of the barriers to the CPSC releasing information is 6(b) of the Consumer Product Safety Act. It allows companies and the government to keep brand-specific information and reports of injuries and deaths a secret.

More information about 6(b) is in the Consumer Product Safety Act 6(b) Fact Sheet.

And here are opinions about 6(b) from safety advocates:


You can also contact your federal legislator and tell them to act.


More info on the proposed FASTER Act, which is designed to speed up the recall process:

"Because the agency is in the middle of a change in leadership and therefore an on-camera interview with the leadership is not possible and CPSC wants to emphasize that inclined sleepers and infant safety are top priorities here at CPSC. CPSC continues its investigation of other inclined sleepers while at the same time is working diligently to address this product category in its entirety through a mandatory standard."