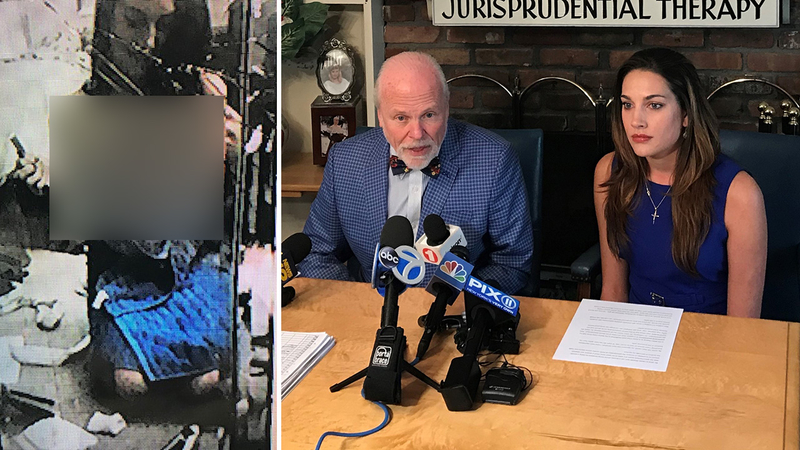 BELLPORT, N.Y. (WPVI) -- A middle school teacher from Long Island, New York is planning to sue her former school district after she was fired, she alleges, for a topless selfie.

Lauren Miranda, 25, has taught math at Bellport Middle School for the past four years.

She said a topless selfie she took of herself in her bedroom in 2016 and sent to a former boyfriend who also teaches in the school district somehow leaked to at least one student at the middle school.

Miranda's attorney John Ray said the superintendent of the South Country School District told Miranda she was being fired because she could no longer serve as a role model for the students.

In January, she was placed on administrative leave with pay and was fired by the school board last Wednesday.

Both Miranda and Ray said they have no idea how the photo ended up in a student's hands.

Miranda is planning to file a $3 million federal suit for gender discrimination, alleging her rights as a woman were violated.

She said she will not file the lawsuit if the school district gives her her job back.

"What is wrong with my image?" she said. "It's my breasts. It's my chest. It's my body. It's something that should be celebrated."

Ray said the school district is discriminating against Miranda because she's a woman.

"Anytime a man has ever exposed his chest, no one has ever commented or had any problem with it whatsoever," he said. "But when a woman displays her chest, as happened here, she's get fired from her job."

Miranda provided WABC-TV with her review from last school year, which showed her to be a "highly effective teacher."

The teacher observation review stated, "Ms. Miranda demonstrated in this lesson to be an outstanding Math instructor, knowledgeable of her content area, but most of all genuinely dedicated to the academic progress of her students."

Miranda was up for tenure in June and said one of the reasons she is pursuing a lawsuit is to serve as a role model for female students.

"What message is that saying to the girls who have their photos airdropped all over the high school and sent all over?" she said. "What message are we sending to them? To roll over when your picture gets exposed without your permission or consent? So how am I now not being a role model to them?"

The school district would not make anyone available to WABC-TV to speak about the situation, only saying in a statement on behalf of Superintendent of Schools Dr. Joseph Giani, "The district does not comment on active litigation."

WABC reporter Kristin Thorne spoke with parents about the picture.

"Whether her intentions were for a student to get it or they weren't, a student did and you have to be responsible for your actions," parent Randy Miller said.

Parent Arlene Henao said she is torn, because it appears Miranda never had any intention of a student getting a hold of the picture.