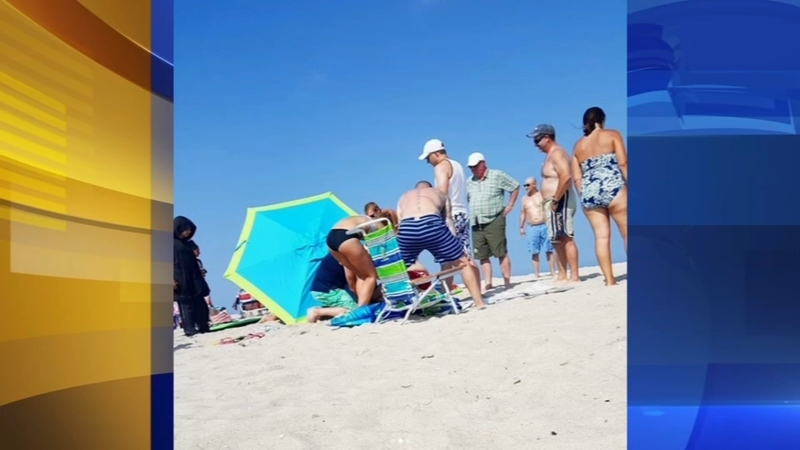 SEASIDE HEIGHTS, N.J. (WPVI) -- Police say a London woman was impaled by a beach umbrella on the New Jersey shore.

Margaret Reynolds, 67, was at Seaside Heights Monday afternoon when part of the umbrella pierced her right ankle and was driven completely through due to the "force of the wind."

Borough Police Chief Tommy Boyd says fire crews had to use a bolt cutter on the umbrella to free the woman and put her in an ambulance.

Dr. Chris Strother - an emergency department pediatrician - was there to help. He said a spoke, not the shaft, of the umbrella injured the woman.

"Big beach umbrella blew loose with the wind, flew down, and hit a woman with the end of the spoke, went right through the bottom of her leg," he said. "It went in here and out the other side."

Strother says he and others immediately sprang into action.

"Another guy who was there was an EMT in Jersey who beat me to it. We were both there, he had a med kit, he had a tourniquet to stop the bleeding, and we just held on to the umbrella until EMS got there to cut it off," Strother said.

"It was a beautiful day and a gust of wind blew the umbrella. It was just an accident," Reynolds said in a statement released by the hospital.

Police here say there's really only one way to prevent this from happening: plant the umbrella with a back-and-forth motion, not circular.

They also say it has to go two feet into the ground to prevent it from being lifted up by the wind.