Philadelphia's iconic LOVE sculpture on the move in Center City 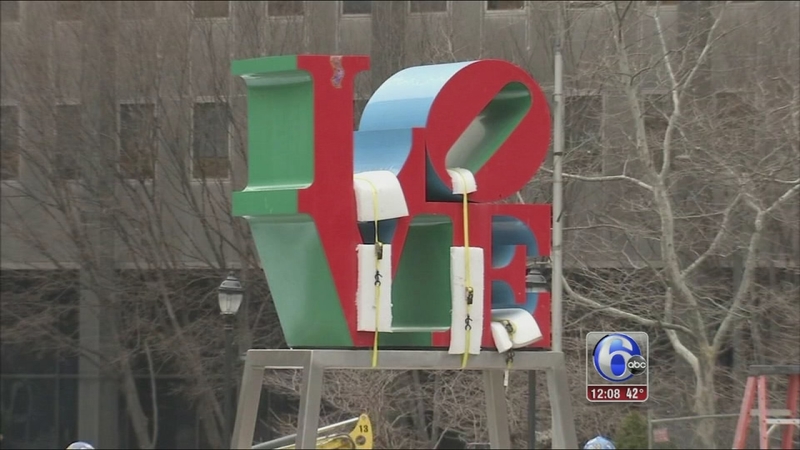 CENTER CITY (WPVI) -- Philadelphia was spreading the love Tuesday - literally, across 15th Street from one park to another - and everyone, it seemed, was doing a double-take.

"That's the first thing I noticed," said James Young of Wynnefield. "The LOVE statue had been moved."

"This is kind of sad," said Brittney Bruno of Center City. "Where is LOVE going?"

The LOVE sculpture, created by artist Robert Indiana, originally came to the city's JFK Plaza on a loan for the city's bicentennial celebration in 1976.

Civic leader Fitz Eugene Dixon later bought and donated it to the city. The piece is so iconic the plaza became known as LOVE Park.

Now it's time for renovations to the park, so the LOVE sculpture will call Dilworth park home for about a year.

Tuesday morning crews hoisted the piece of art, which weighs more than a thousand pounds, onto a forklift, then slowly moved it with painstaking precision across the street.

"The white pieces of foam protect the paint," said moving engineer George Young. "When we walk it across the street, the fork truck has a dampening system. That allows it to move on an almost cushion of air. We just handle it slowly and carefully.

George Young's family business has moved hundreds of pieces of the city's art and artifacts over the course of decades, including the Liberty Bell.

Young, like so many Philadelphians, feels a connection to this piece.

"This one is special for me," he said, "because I met my wife many years ago, and ten days after we met I proposed to her in front of the LOVE statue on Valentine's Day."

Philadelphia has one of the oldest and largest collections of fine art and sculpture in the country, with more than 1,000 pieces located around the city, both indoors and out.

Love Park officially closed Monday until the renovations are complete.