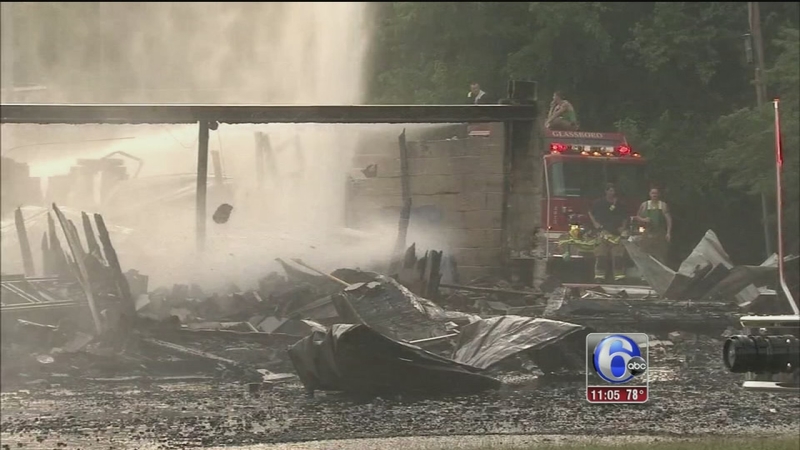 FRANKLIN TWP., N.J. (WPVI) -- A lumber yard serving the community since 1945 was destroyed by a three-alarm fire in Gloucester County.

The fire was reported Sunday afternoon at Colucci Lumber Yard located on the 300 block of Delsea Drive in Franklin Township.

Action News obtained viewer video that shows the heavy smoke and flames shortly after the 3-alarmer started this afternoon.

"First crews came in, heavy smoke conditions inside. They made an interior attack, and as they're going inside, they're getting driven back by the fire so they went to a defensive operation," said Malaga Fire Co. Chief Anthony Baldosaro.

Because the community doesn't have hydrants, tankers from four counties were called in to pull water from a nearby lake.

"The firefighters were hampered by the hot weather and low water pressure. We did have variable winds earlier that was blowing around pretty good. We did have a few collapses during the fire," said Baldosaro.

Measures were taken to keep firefighters cool, but at least two were taken to the hospital for heat exhaustion, and 15 others were treated on the scene for heat-related symptoms.

As the sun set Sunday, firefighters extinguished hot spots and locals gathered to watch, reminiscing about the 71-year-old business that had become an institution around here.

"My father used to shop here. I bought lumber here. A lot of people in the area bought stuff here," said Phil Capano of North Vineland. "It's kind of shocking."

Branden Colucci says the hardware store also stocked a lifetime of memories. His grandfather started the business that's now owned by his dad and uncles.

"I already did my crying in my car. I'm still going to need to process it. But it'll get better. Hopefully," said Branden Colucci, co-owner's son.

We're told one of the owners left the store 30 minutes before the fire was reported, but the store was closed and no one was inside when the fire started.

The fire marshal was on the scene digging through the rubble, but so far no cause has been determined.