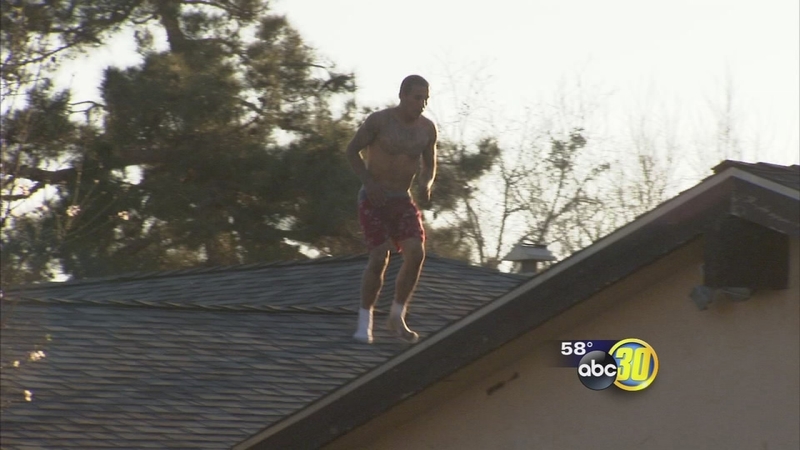 FRESNO, Calif. -- Fresno police were led on a wild chase as kidnapping suspect, Abel Rodriguez, 29, ran from them, jumping from roof to roof Monday. The pursuit happened moments after officers say Rodriguez threatened to kill a woman whose house he had just broken into.

They were frightening moments for that woman. No one knew about the threats until she escaped.

Police initially responded after getting calls that Rodriguez was going through people's yards. Neighbors helped officers scramble to catch him as he jumped from home to home.

Rodriguez was trying to run from police who were already inside the home they say he broke into. Action News captured the moment Rodriguez broke out of the attic and onto the rooftop.

He appeared to be surrendering when he actually took off running in nothing but underwear and socks.

Neighbors shouted to police as Rodriguez tried to dodge them. None of them were aware of the horror Gloria Perez had just endured. "I could hear him, he came into the room," she said. "I didn't have time to lock the door. I just hid in the closet."

Perez lives next to and owns the house police say they watched Rodriguez break into through a window. She didn't know he was inside when she went to lock it up.

While officers searched outside Perez said Rodriguez pulled her out of the closet by her hair. She said they struggled as she tried to get away.

"He threw me against a mirror we had in that room and it broke," Perez said. "And then he got behind me, he had me in a choke hold with a screwdriver pointed against my neck."

Officers had the home surrounded, and began to move in, not knowing the threats being made inside. With Rodriguez distracted, Perez took her opportunity to escape.

"I could see the officer right there," she said. "I opened the window and started screaming help. The officer, I kind of startled him, and he pulled me out."

Police are grateful for neighbors who helped direct them to their suspect as he ran.

"He started running over the roofs, so I ran to my backyard," Gabriel Marquez said. "And I went to where he was at, and I said 'you ain't coming back here.' and so he started jumping over fences into other backyards."

Julie Mendoza came home to see Rodriguez on her roof, and officers rushing around the block to catch up to Rodriguez. "It was horrible," Mendoza said. "I was shaking."

Her grandkids were inside during the chaos. "I started just really stressing out," said Mendoza. "My babies were in there, so I was just screaming be careful my babies are in there."

Police say Rodriguez was tased by officers and then arrested. He is being held at the Fresno County Jail. He was initially wanted on a warrant for car theft. Now he's facing charges for kidnapping, assault with a deadly weapon, evading arrest and other charges, police say.

Perez says she was cut by that broken mirror. Other than that she's just shaken up.