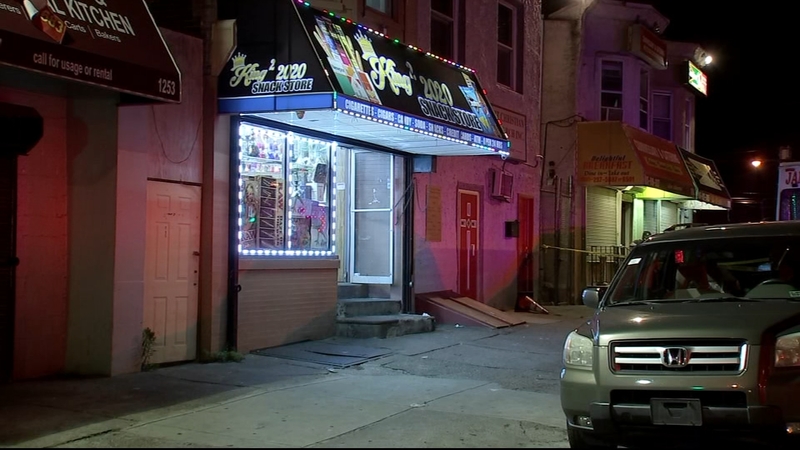 PHILADELPHIA (WPVI) -- A search is on for the gunman who killed one man and injured another inside a Philadelphia business on Tuesday night.

It happened around 9:50 p.m. at a variety store located on the 1200 block of East Chelten Avenue.

According to police, the gunman walked up behind 22-year-old Dashean Lee as he was entering the store and unleashed a barrage of bullets.

Lee, of the 1100 block of E. Stafford St., was shot in the head, back and chest. He was rushed to an area hospital where he later died.

"The shooter walked up right behind them from just a few feet and began firing numerous shots into the back of his head and his back. And the victim then immediately collapsed and fell onto the front steps of the variety store... (It) clearly appears to be an execution type homicide," Chief Inspector Scott Small said after seeing a video of the shooting.

The second victim, a 27-year-old man, was in the take-out area of the store when police believe he got hit by stray gunfire.

He was shot one time in the ankle and was able to flee the store after the shooting. He is currently being hospitalized for non-life-threatening injuries and was listed in stable condition.

Small says at least eight shots were fired by the gunman who is still at large at this time.

Chopper 6 over deadly double shooting in East Germantown on June 1, 2021.

The shooter is described as a man wearing a black hoodie. The suspect was last seen on foot on the 1200 block of Chelten Avenue walking in the westbound direction.

Anyone with any information on the shooter is asked to call police at 215-686-TIPS.