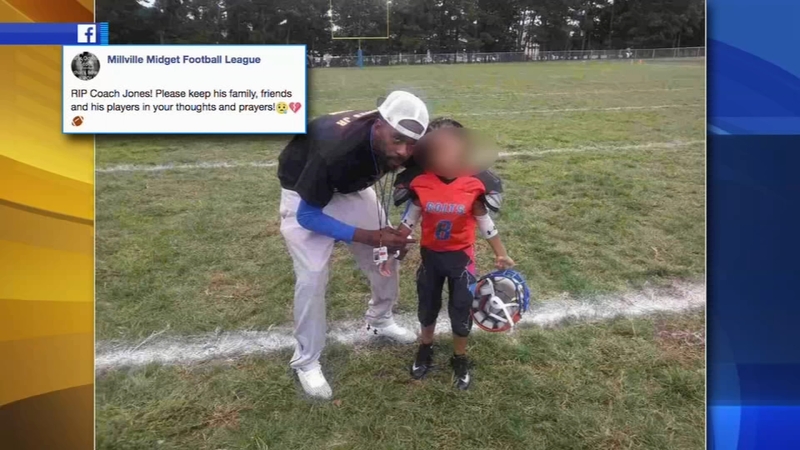 Man dead after being shot near middle school in Millville

MILLVILLE, N.J. (WPVI) -- Police are hunting for the gunman who killed a man near a school in Millville, New Jersey.

Joseph L. Jones, 37, of Millville was shot inside a car around 8:15 p.m. inside a car parked near Lakeside Middle School.

According to witnesses, the Millville youth football league had just wrapped up practice behind the school.

Jenna Ackley was one of the many parents picking up her son.

Man dead after being shot near middle school in Millville. Bob Brooks reports during Action News at Noon on August 10, 2018.

"He comes across the parking lot and as he's walking towards my car we hear 'bang bang bang bang.' And my son gets all scared and he starts running towards the car and I'm like 'What? That's not gunfire!"

It turns out it was gunfire.

Ackley says there might have about 200 people around the parking lot and fields when it happened, and they all started running for cover.

"I see everyone running and I hear one of the other coaches say, 'Hey down get down!' And my son is like 'Mommy, mommy let's get in the car, let's go home," Ackley said.
While the investigation continues, Ackley says her son is probably one of many children here who are scared to go back to practice.

"He doesn't want to go back. He was crying in the car saying, 'I don't want to die, I don't want to die.' And I'm saying it's okay, but deep down I'm thinking 'Is this what Millville has become, we can't even take our kids to football practice?'"

There was no word on a possible identity of the gunman. However, authorities say masked individuals involved in the homicide fled the scene in a maroon colored sedan.

Police have released a photo of the vehicle of interest in the killing of 37-year-old youth football coach, Joseph Jones.

Though league officials say he was not an official coach, Jones was known for coaching in various other Millville youth sport leagues.

League officials say Jones was there to watch his son practice on Thursday night.

Police are hoping one of the people around the parking lot and fields at the time will be able to provide more information.

If you are one of them, you are urged to contact Millville police.