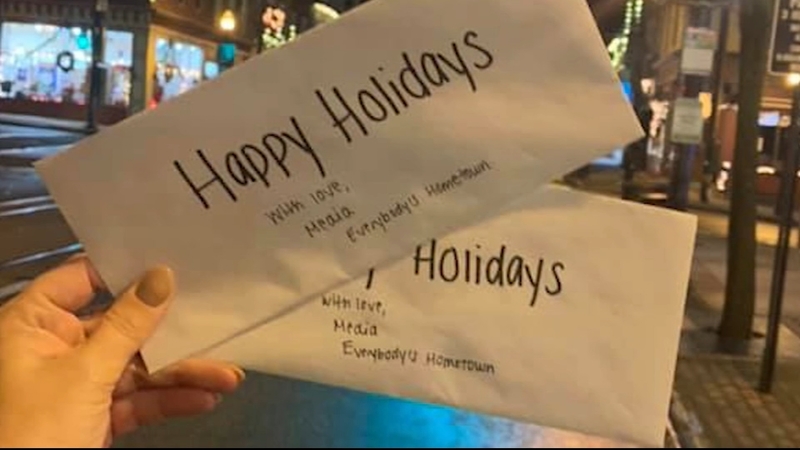 MEDIA, Pennsylvania (WPVI) -- Some people are calling her the Santa Claus of Media. Others, Brittany Claus.

"When they see Brittany walk in the door, their heart drops because they know what's going on," said Hallie Yancey, the general manager of Sterling Pig.

Her name is Brittany Scharr. Saturday was her 91st time walking into a Media restaurant to surprise a server.

"I failed out of college my first time, but I didn't give up." Leonard Chester, now a high school teacher, is giving back to his West Philadelphia neighborhood in a big way.

"I've been going around gifting $100 to local servers and bartenders and you were on my list!" she told a server at Dos Gringos Mexican Kitchen.


It started a few weeks ago when Pennsylvania banned indoor dining because of the rise in COVID-19 cases. As a former restaurant worker, Brittany wanted to help.

"It was really heavy on my heart from being in the industry for so long and still having so many friends inside the industry, knowing they were struggling from the original shutdown," said Scharr, who lives in Media.

"Right before Christmas to have that happen, I just felt called to do something," she said.

The Media community felt the same way and started donating. Within a matter of days, "...Right now we are at $12,605," said Scharr.