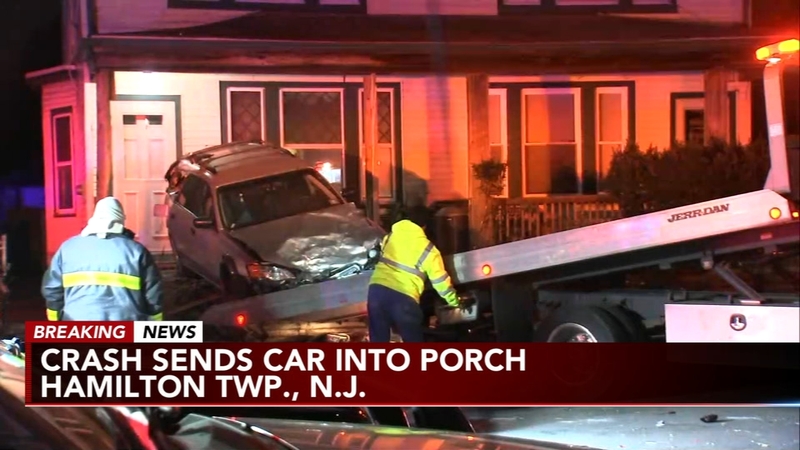 HAMILTON TWP., New Jersey (WPVI) -- Emergency crews were called to an early morning multi-vehicle crash that sent an SUV into a house and caused another to catch fire in Hamilton Township, Mercer County.

It happened around 1:15 a.m. Wednesday near the intersection of N. Johnston Avenue and Tipton Street.

Police said officers were pursuing a car that hit six parked vehicles and sent an SUV into a home's porch.

Four people were inside the Chevy that crashed; one person suffered a leg injury, according to police.

The impact of the crash sent an SUV onto the front porch of Russ Starr's home.

"It was a rude awakening but hey, that's life," Starr said.

He's lived in the home for 60 years and said he never expected something like that to happen.

"I really had no idea what happened. I heard the boom, felt the house shake. My wife and I jumped out of bed, looked out our front window, seen an individual lying in the street. My son ran down and that's when he yelled there's a car on our porch," Starr said.

Starr said another car briefly caught fire, burned the sidewalk and some of his bushes out front.

"We're all alive, that's all that matters at this point," Starr said.

A building inspector was called and firefighters helped Starr put back a pole that was knocked down from his porch.

Trenton police have not said what led to the crash or whether charges will be filed.