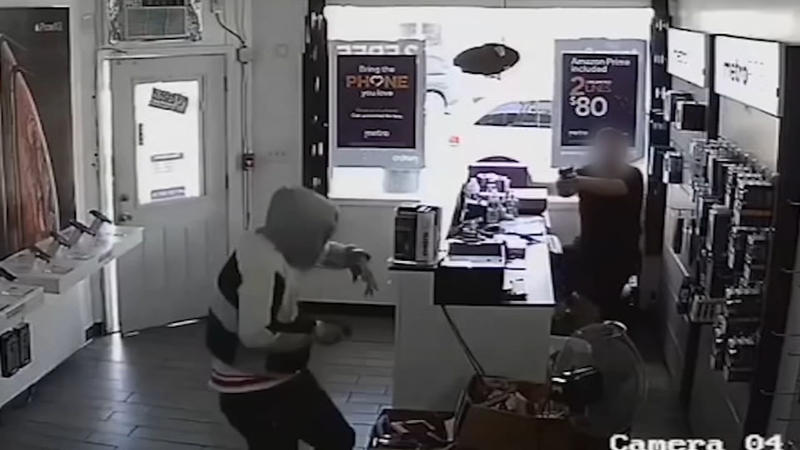 PHILADELPHIA (WPVI) -- A store employee shot and killed a would-be robber in Philadelphia on Monday afternoon.

It happened around 4 p.m. at a MetroPCS store located on the 7000 block of Elmwood Avenue.

Police say an armed man in his 30s attempted to rob the store when the MetroPCS employee, who has a permit to carry, shot the suspect.

Police say the suspect died at the scene.

"A male entered the store with a firearm and attempted to rob the store to which (the employee) discharged his firearm at the robbery suspect several times, striking him," said Philadelphia Police Captain Scott Drissel.

Neighbors here say they heard the shots from inside.

Local activist Joar Dahn says it's unfortunate someone has died but also says people have to protect themselves.

He also says he's grown accustomed to shootings here in the neighborhood.

"He's doing his job and standing his ground and whatever he had to do. But this is the normal in Southwest. It's an everyday thing, nothing new for us," said Dahn.

Police confirm this was the third time recently that someone had come into the MetroPCS store with the intent to rob it.
Report a correction or typo
Related topics:
philadelphia newscrimephiladelphiaphiladelphia police
Copyright © 2022 WPVI-TV. All Rights Reserved.
TOP STORIES
AccuWeather: Severe Thunderstorms This Evening
Teen, officer and driver injured after police chase ends in crash
'American Idol' finalists gear up for last performances in finale
Texas woman sought in fatal shooting of pro cyclist: US Marshals
Something strange is happening with our universe: NASA
3 women wanted in assault, robbery on SEPTA train: Police
78,000 pounds of infant formula arrives in US
Show More
12 shot and 4 dead after string of shootings in Philadelphia
Fate of 2,500 Ukrainian POWs from steel plant stirs concern
Pennsylvania's Fetterman released from hospital after stroke
Some peanut butter recalled for potential salmonella
Biden pushes economic, security aims as he ends South Korea visit
More TOP STORIES News