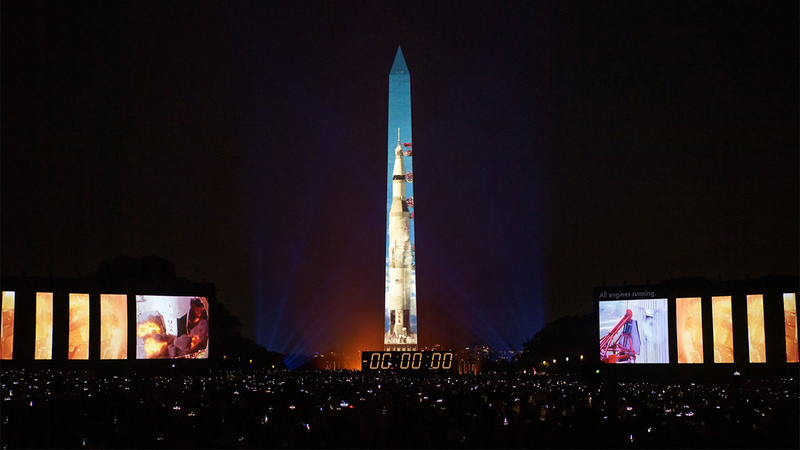 WASHINGTON -- The nation's capital celebrated the 50th anniversary of the Apollo 11 moon landing in the most patriotic way possible: by projecting it onto the Washington Monument.

All week, images from the historic event were beamed onto the monument as part of a display commissioned by the Smithsonian's National Air and Space Museum and the U.S. Department of the Interior. From July 16 until July 18, a a full-sized, 363-foot Saturn V rocket was projected onto the monument's east face from 9:30 p.m. to 11:30 p.m.

The show ramped up on Friday and Saturday, when a 17-minute show commemorating the moon landing was projected onto the monument. The Smithsonian said it used "full-motion projection-mapping artwork on the monument and archival footage to recreate the launch of Apollo 11 and tell the story of the first moon landing."

The free show, which was presented three times each evening, also included a 40-foot recreation of the Kennedy Space Center's famous countdown clock. Congress funded the display through a bipartisan joint resolution.

"Our identity as Americans is defined in part by the historic act of landing humans on the moon and returning them safely to the Earth," said Ellen Stofan, the director of the National Air and Space Museum, said in a news release. "The Washington Monument is a symbol of our collective national achievements and what we can and will achieve in the future. It took 400,000 people from across the 50 states to make Apollo a reality. This program celebrates them, and we hope it inspires generations too young to have experienced Apollo firsthand to define their own moonshot."

Who walked on the moon? A look back at the Apollo moonwalkers
Neil Armstrong's famous "one small step" quote explained
NASA takes a look back at Apollo 11's launch day