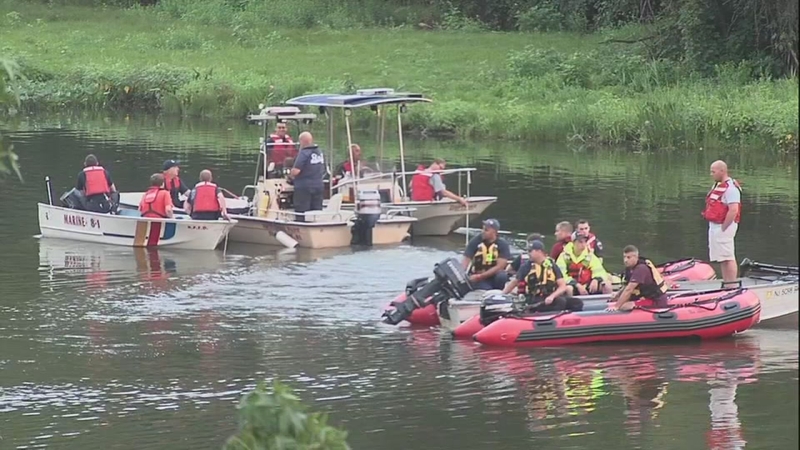 WOODBURY, N.J. (WPVI) -- Police are investigating after a shoplifting incident ended in the drowning death of a man in Woodbury, New Jersey.

It's was a tragic scene at the Woodbury Lake Saturday morning.

Rescue teams were seen removing the body of a 20-year-old man.

Police say it's the end result of a shoplifting incident that escalated to a fatality.

Detectives say it all started around 4 a.m.

The 20-year-old was spotted shoplifting from the Wawa just yards up the street.

They say when police arrived, he took off and jumped into the Woodbury Lake.

This is the chaotic scene Clyde Butler saw when he showed up to work at the shopping plaza on Evergreen Avenue.

The lake is right behind it.

"There was police lined up everywhere, caution tape department all back here. I got a few stories from people working with the team that somebody drowned," Clyde Butler of Woodbury said.

It was clear rescue crews were searching for someone.

Police say after he jumped in and refused their commands, the man swam under the Evergreen Avenue Bridge and they lost sight of him.

It wasn't until later this morning sometime after 10 o'clock, he was found towards the middle of the lake and removed by the dive team.

Victoria Brown of Images Salon saw the moment that happened.

"So I opened the door. I wanted to see what was happening and I looked to my left and the body was laying right there," she said.

Right now officials are ruling the death as accidental.

Brown says she lived here in Woodbury her whole life, never saw anything like this before, and hopes it's the last time it does.

"I think its crazy I grew up here," Brown said.

Police have not released the man's name.