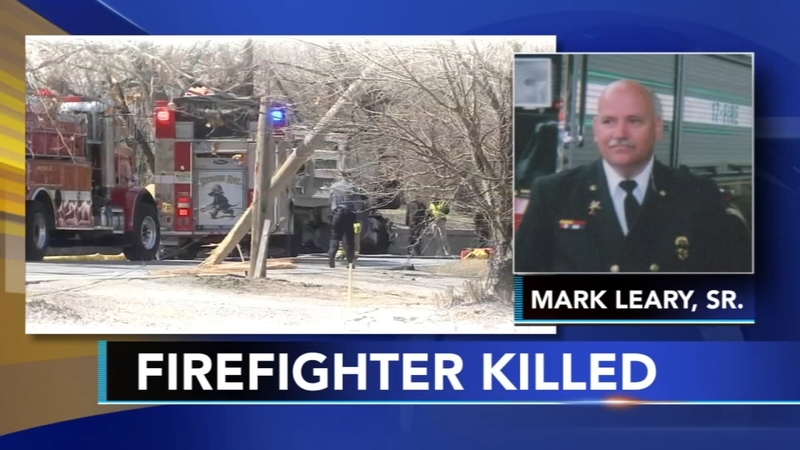 HOPEWELL TWP., N.J. (WPVI) -- Black bunting now hangs over the door to the Lambertville firehouse and the flag that stands outside is at half-staff.

The Lambertville Fire Service is mourning the death of longtime volunteer firefighter 58-year-old Mark Leary, Sr. who was killed in a collision in Hopewell Township, Mercer County.

"Mark Leary was a fireman, maybe from the day he was born. He's been an active member of our Lambertville department since he was 16 years old," said Al Komjathy, Chairman of the Lambertville Board of Fire Commissioners District 1.

Police say Leary was riding southbound in a Ford Crown Victoria heading in the direction of Trenton along busy Route 29, not far from Fiddlers Creek Road and the Trap Rock Quarry.

Leary and a relative were on the way to a school to pick up a child.

The car, which was driven by that relative, was struck head-on and crushed by a northbound dump truck. The collision caused both vehicles and a utility pole to catch on fire.

The vehicles came to rest in the southbound lane.

Leary's fire company initially responded to the crash not knowing one of its own was a victim.

"Rescue 17 responded to this call unknowing that it involved one of our own until hours later," the fire department posted on its Facebook page.

Chief Mike Barlow had talked to Leary less than an hour before.

"We were standing there talking about the day's events," Barlow said. "Lo and behold, 50 minutes later, we were responding to an accident that involved him."

Once on scene, Hopewell Township police told them to return to their station.

"They're asking us to return to the house. Later on we learned," said Komjathy. "It was a hurting place last night."

According to investigators, the driver of the truck, James Bilton, 59, of Edgewater Park, New Jersey, did not suffer any serious injury.

Leary and his relative were pronounced dead at the scene.

The firefighter was described as a salt of the Earth kind of guy, a 24/7 volunteer who grew up in Lambertville. Two sons followed him into the service.

"His spirit lives on through his sons Mark Leary Jr. and Collin Leary who are also members of the District. Mark was always willing to help you no matter the circumstances, and often stepped up to the plate when nobody else would," the Lambertville Fire Department said in the Facebook post.