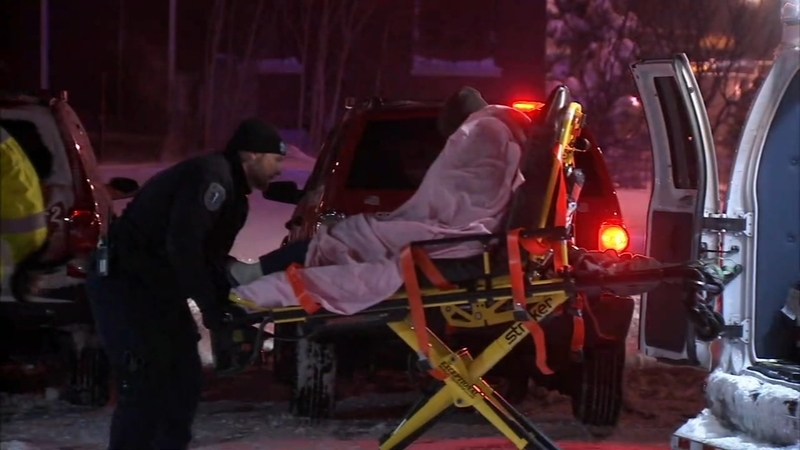 Resident Willie Faust said he immediately darted for the stairwell of the Jeffries Inlet Towers in the 200 block of N. Vermont Avenue after the fire broke out around 6 p.m.

"There was so much smoke coming out of the hallways," said Faust. "We were going down the steps, and all of a sudden we looked at the elevators, and the panels from the ceiling fell and all this fire is coming down."

Atlantic City Fire Crews on scene of what evacuated residents say is a senior citizen home that grew to 3 alarms. @6abc pic.twitter.com/jw6A9NzU3L

It was a mass evacuation from a 16-story building; residents from 456 units racing to get out of harm's way.

Atlantic City fire crews rushed to contain the blaze that officials said started between the first and second floor of the building and quickly shot up a utility shaft.

"This turned out to be a dangerous electric fire," said Atlantic City Fire Chief Scott Evans. "One of the main feeds in the building was apparently overloaded in some fashion and exploded."

Family members panicked as they watched from the snow-covered sidewalks, not knowing the status of their loved ones.

The complex, run by the housing authority, is home to senior citizens and the disabled.

Dominic McClinton snapped photos as he helped people down the stairwell.

"It was panicky at one particular time," said McClinton. "But most of the people are out of the building and everyone is safe. Thank God."

Some of the residents had to be removed by ambulance and others were ushered to a nearby community center as fire crews investigated.

"We had people in wheelchairs trying to get down from the eight floor. That's pretty scary!" said resident Francine Star.

Fire officials report that the fire took approximately two-and-a-half hours to bring under control. Investigators remained on scene, examining a utility shaft that supplies electricity to all the floors.

Officials said 291 people were forced out of their homes for what could be for a minimum of three days, as the incident left the building with no power.

The residents, who were directed first to a temporary shelter in a nearby school or placed in a jitney to warm up, were later given rooms in various hotels and casinos.

They were assisted by the American Red Cross.