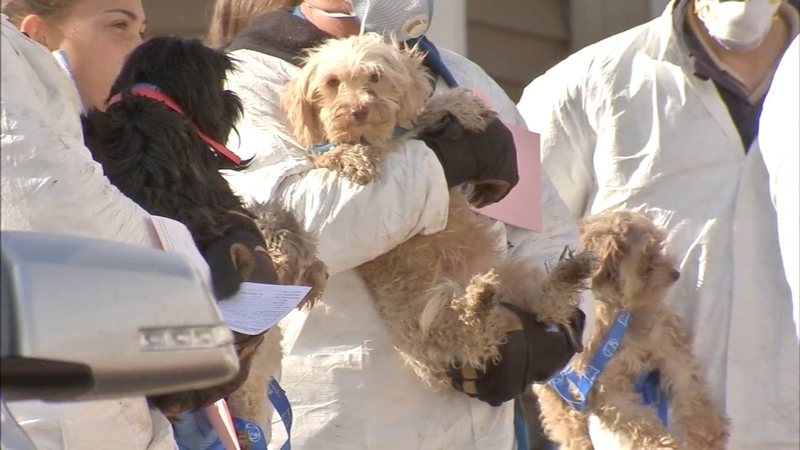 SHAMONG TOWNSHIP, New Jersey (WPVI) -- New Jersey State Police have arrested a 65-year-old woman after they say dozens of dogs were found dead in freezers and more than 100 more living in filth inside her home.

Donna Roberts, 65, from Shamong Township, is now facing charges for allegedly keeping all the animals in deplorable and inhumane conditions in and around her house on Oakshade Road.

Detectives responded to Roberts' residence to assist the Burlington County Health Department with an inspection on Tuesday, and when they arrived, they say they observed evidence of animal cruelty inflicted upon various breeds of dogs on the property.

The odor of animal feces and ammonia was said to permeate the inside of the residence, which caused several of the responders to experience dizziness and nausea.

Detectives discovered 161 dogs living in squalor, as well as 44 deceased dogs that were packaged in plastic bags and stored in freezers throughout the residence.

It was determined that four of the dogs were in critical condition and had to be transported to an emergency veterinary clinic. The remaining dogs were evaluated and treated at the scene by animal shelter workers.

"Although the circumstances surrounding the demise of the 44 dogs that were discovered inside plastic bags in freezers remain under investigation, the deplorable and inhumane living conditions the rescued dogs were forced to endure is tragic," New Jersey State Police Colonel Patrick Callahan said. "Troopers take an oath to protect and safeguard life, including the lives and well-being of pets, which can be vulnerable to abuse."

Roberts was charged with animal cruelty and released with a pending court date.

The case is being prosecuted by the Burlington County Prosecutor's Office.