2 Dead in Amtrak Crash Near Philadelphia 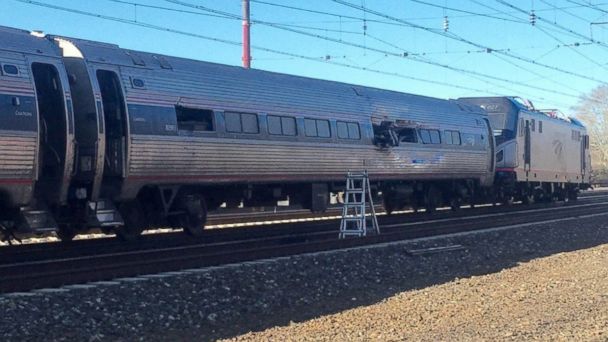 Amtrak said Train 89, traveling from New York to Savannah, Georgia, partially derailed after striking a backhoe that was on the tracks.

The identities of the two victims were not immediately clear.

The Pennsylvania Emergency Management Agency said the two fatalities were reportedly the backhoe operator and another track worker. Travis Thomas of the Chester Fire Department said the two people killed were not passengers. Amtrak did not immediately comment on the victims.

The train struck the backhoe in Chester, Pennsylvania -- approximately 15 miles outside of Philadelphia -- and came to a stop in the neighboring town of Trainer, the fire department said.

The train had 341 passengers and seven crew members on board at the time of the crash.

Passenger Ari Ne'eman, who was sitting in the second car, told ABC News the train got "extremely bumpy" and at one point the window in the aisle across from him "started to break apart."

He said it appeared that many injuries were in the first car. Ne'eman said most passengers were fine and that they were being moved to a local church.

Federal Railroad Administration officials are at the scene. The National Transportation Safety Board was notified and planned to send a team.

Amtrak is working with the NTSB to investigate.

Amtrak said this afternoon it is now resuming limited service between Wilmington and Philadelphia. Keystone Service between New York and Harrisburg was not affected, Amtrak said.