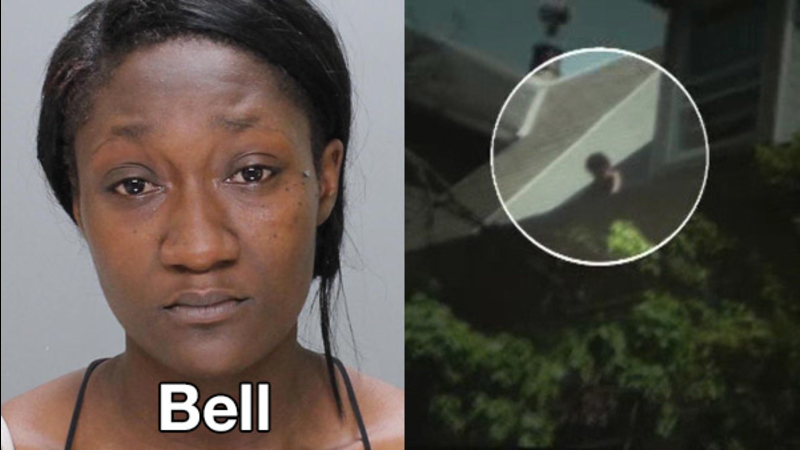 FRANKFORD (WPVI) -- A woman and a teenage girl are facing charges after a 2-year-old child was discovered on the roof of a home in Philadelphia's Frankford section.

22-year-old Cleaira Bell was arrested and charged with endangering the welfare of a child, and recklessly endangering another person.

A 17-year-old girl is charged as a juvenile with endangering the welfare of a child, and recklessly endangering another person.

Neighbors on the 4700 block of Leiper Street noticed the child on the roof of the home Monday afternoon.

The young child made his way onto the roof through an open third story window.

In cellphone video captured by a neighbor, the child is seen walking around the sloped roof.

Neighbors screamed for the child to sit down.

"Everybody was trying to distract the baby so he wouldn't fall off the roof. Everybody was saying 'sit down, sit down,'" one neighbor said.

Firefighters arrived on the scene and set up a ladder.

At the same time, arriving police officers were told no one was in the apartment, so they ran up to the third floor and forcefully gained entry to the residence.

According to witnesses, the child reached out to grab the firefighters' ladder. However, before rescuers began their climb, an officer pulled the boy back inside to safety through the third story window.

The police officers also rescued a 1-year-old boy who they say was attempting to climb out of the window.

A short time later while emergency crews were still at the scene, the mothers of the toddlers arrived, and they were arrested.

The children were transported to St. Christopher's Hospital for observation.