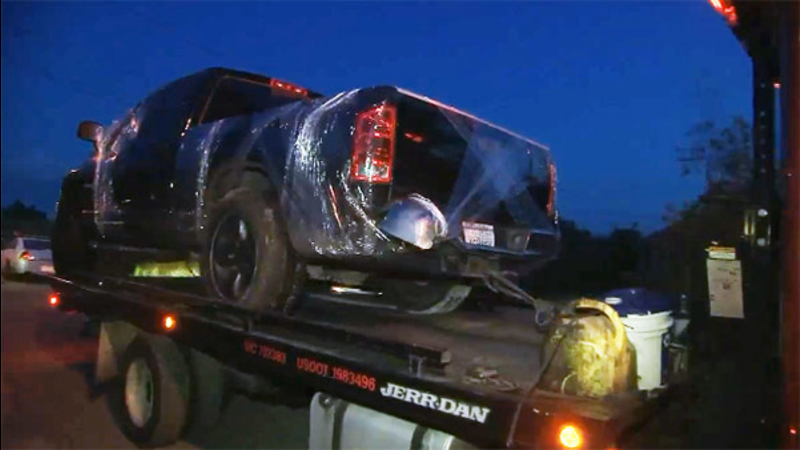 EGG HARBOR TWP., N.J. -- New Jersey State Police have found the third vehicle connected to a shootout on the Atlantic City Expressway on Monday that left one man dead.

Only Action News was there Tuesday night along the 200 block of East Oakland Avenue in Pleasantville as the black Dodge Ram was being taken into evidence.

New Jersey State Police have found the third vehicle connected to a shootout on the Atlantic City Expressway on Monday that left one man dead.

Earlier Tuesday, five people, including a 16-year-old boy, were charged after what New Jersey State Police called a "rolling shootout."

Investigators said troopers were alerted to the shooting by multiple emergency calls around 3 p.m.

The shooting involved moving vehicles in the eastbound lanes of the expressway in the area of exit 12.

A short time later, troopers on the Garden State Parkway received 911 calls for a medical emergency in the northbound lanes near milepost 39.

There they found 22-year-old Rosemund Octavius, of Egg Harbor Twp., in the passenger's seat of a silver Nissan Maxima. He was dead from a gunshot wound.

Pictured: The scene after a shooting in Egg Harbor Twp. on Monday, August 29.

Then, troopers say, more 911 calls came in about four males with gunshot wounds at the Wawa store on Delilah Road. They had been riding in a white Ford Expedition, which was parked near the store.

It had been hit with bullets 21 times, police say.

Five people have been charged after a shootout in Egg Harbor Twp.

Police say they tracked the path of the Expedition to a location near the Wawa, finding three handguns and an AK-style assault rifle.

Witnesses told police they had also seen a black Dodge Ram pickup truck that may have been involved. Police say the vehicle may have exited the eastbound lanes of the Atlantic City Expressway in the Pleastantville area.

"A situation where gunfire was aimed at cars that were moving. Obviously extremely dangerous to everybody, not just those intended targets," said Capt. Stephen Jones of the New Jersey State Police.

Willies Lleras saw the heavy police activity as he passed the Wawa on Monday.

"We all take the expressway from time to time, so to see a shootout going on between vehicles? That's nuts, that's like TV, like a movie or something," he said.

Troopers charged five suspects, including four adults and one juvenile, with weapons offenses. Police say it is not yet clear from which vehicle the shots were fired that killed Octavius, or injured the people in the Expedition.

Police in Egg Harbor Township respond to a shooting at a Wawa on Tilton Road.

The investigation is ongoing, troopers said, and the charges reflect the "early phase of this case."

Those charged were identified as:

-Anthony Hicks, 24, of Mays Landing (the driver of the Maxima)