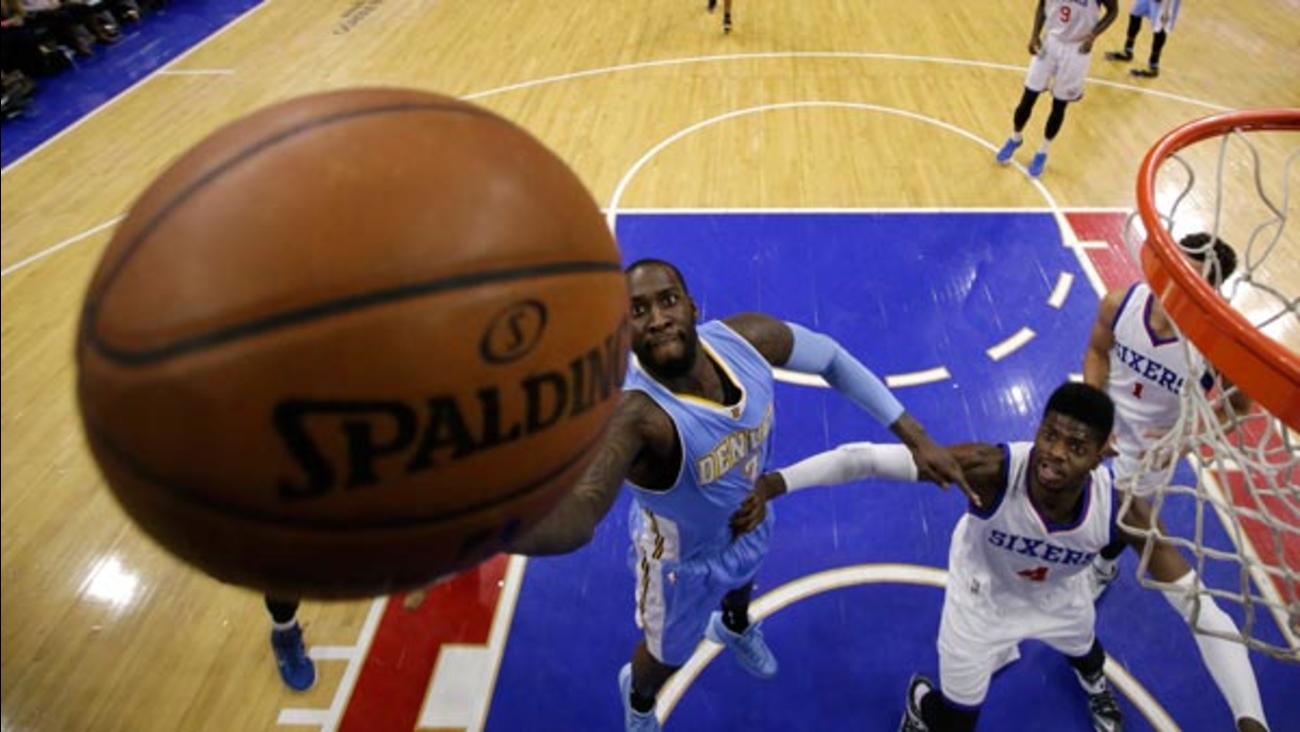 Denver Nuggets' J.J. Hickson (7) goes up for a shot against Philadelphia 76ers' Nerlens Noel (4) during the first half (AP Photo/Matt Slocum)

PHILADELPHIA -- Hollis Thompson scored a career-high 23 points to lead the improving Philadelphia 76ers to a 105-98 victory over the slumping Denver Nuggets on Tuesday night.

Michael Carter-Williams had 15 points, 12 assists and eight rebounds and Robert Covington added 17 points for the 76ers, who won their third straight home game for the first time since March 2013.

Danilo Gallinari scored 22 points to pace the Nuggets, who dropped their 10th in 11 games. Denver has lost its last three games by an average of 21.7 points.

The 76ers were the laughingstock of the league while starting the season with 17 straight losses. But they have begun to click. With a roster of young, unproven players surrounding first-round picks Carter-Williams and Nerlens Noel, Philadelphia is displaying a tough, gritty style that may put a dent in the club's plan to gain a top lottery pick in this June's draft.

Philadelphia has won three of five, with the two losses in competitive games on the road against Eastern Conference contenders Atlanta and Cleveland.

Thompson's perfect first half helped Philadelphia jump to a 61-40 lead at the break, and the 76ers kept pouring it on after intermission. Larry Drew II's 3-pointer with just under 4 minutes remaining in the third quarter gave Philadelphia its biggest lead at 28 points, 79-51.

Thompson made his first eight field goals, including all four 3-point attempts, before finally missing a 25-foot attempt with 25 seconds left in the third. Jameer Nelson's trey on the ensuing possession pulled Denver within 85-68 entering the fourth.

The Nuggets cut the margin to under 10 points for the first time since 10:18 remained in the second quarter when Gallinari hit a 17-footer with 1:42 left. Lawson's layup with 25.9 seconds remaining made it 101-95, but Covington closed it out with a pair of free throws on Philadelphia's next possession.

Carter-Williams started after sitting out the second half of Monday's 97-84 loss at Cleveland. For the 76ers, it's a good thing he played; Philadelphia has lost 20 straight games, including nine this season, when he's been out of the lineup.

Philadelphia led by 21 at the break thanks to 19 first-half points from Thompson, who didn't miss a shot. He was 6-for-6 from the field, including 4-for-4 from the arc, while making all three of his free-throw attempts. Thompson's 3-pointer with 1:08 left in the half gave Philadelphia its biggest lead of the half, 61-38.

It was the second straight game with a huge first-half deficit for the Nuggets, who trailed by 32 in the first half of Saturday's 104-86 home loss to Charlotte. Denver was blown out 99-69 in its previous game, last Thursday at Memphis.

76ers: Flyers goalie Steve Mason sat courtside and gave several fans a fist bump as he exited to the concourse at the end of the third quarter. . Philadelphia will try for four straight home wins Saturday night against Charlotte. . Carter-Williams and Gallinari had words after Gallinari's hard foul on Jerami Grant with 2:49 left in the fourth quarter. Gallinari was called for a Flagrant 1 foul on the play.