'Dancing With The Stars' shocks in week 7 elimination; dance-by-dance recap 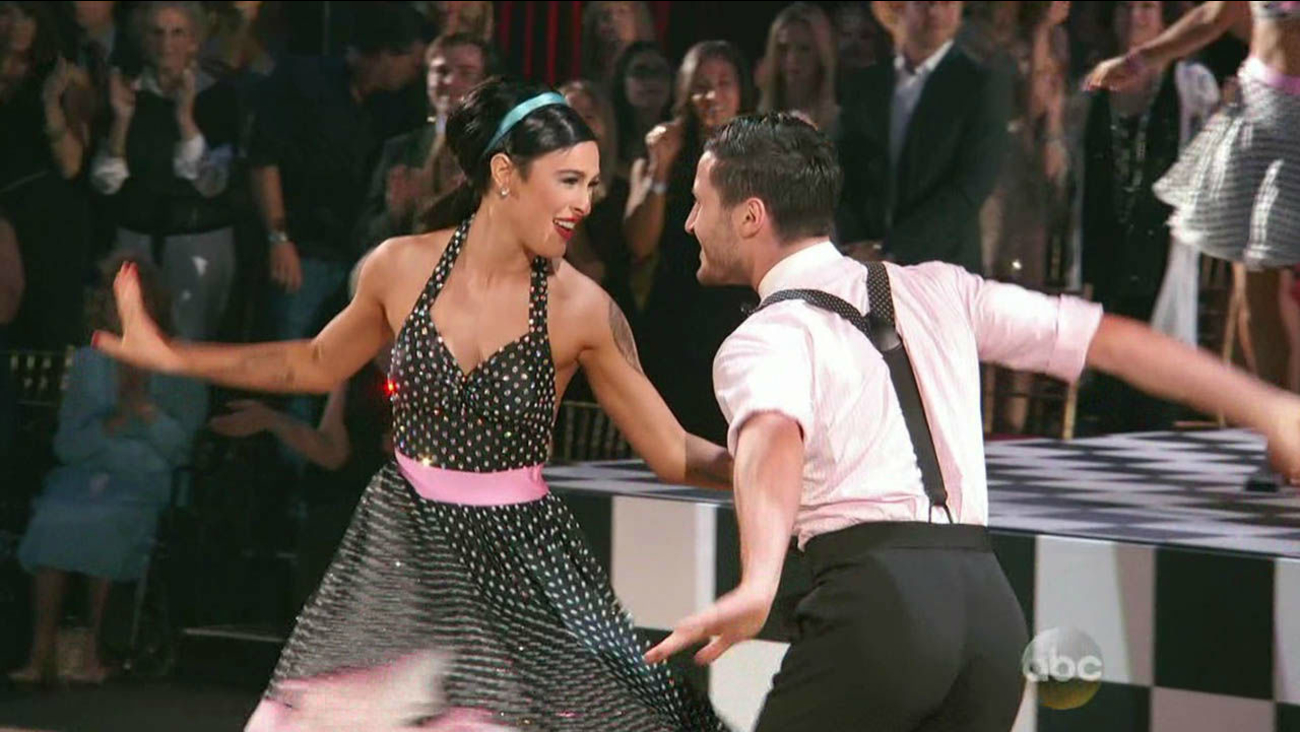 LOS ANGELES -- Seven "Dancing With The Stars" couples jumped in a musical time machine that took us from the roaring 1920's into the funky distant future.

One big incentive hung over everyone's heads this round: whoever had the highest overall score would be granted immunity from elimination. The remaining couples had to compete in a dance-off to earn extra judges' points. Those points were added to their individual scores. Also in the back of everyone's mind, a DOUBLE elimination next week!

NASTIA LIUKIN - 38 out of 40
I'm guessing when the celebrities join this show they imagine all kinds of problems that COULD happen during the course of the competition, but I'll bet Nastia never thought her partner, five-time champion Derek Hough, would break a toe in a freak accident (and then sprain his ankle while trying to deal with it!). Nastia had to very quickly figure out how to learn from, rehearse with, have chemistry with and perform with new partner Sasha Farber. Derek was around to choreograph the "modern Charleston," and in true Derek form it was completely innovative. It even included Derek! Host Tom Bergeron remarked "that's how you make lemons out of lemonade." Head judge Len Goodman gave them a thumbs up (sorry, Len, we're out of time!). Carrie Ann Inaba called their dancing insane and offered up a hug to Nastia for making the switch from a gymnast to a dancer. Bruno Tonioli said the dance was a surprising revelation. Julianne Hough said they "killed" the dance. They're on top and thus win immunity! On to the next round!

WILLOW SHIELDS - 37 out of 40; plus 2 points for Dance-Off
Mark Ballas pulls out an idea he's been harboring for eight years: dancing ninjas, or, as Mark calls it, "Nin-jazz." Mark's on fire with creative choreography this season and this round is no different. He and Willow play around with the thought that they're making a sub-titled Japanese action movie. Bruno and Carrie Ann both praised the way they were "in sync." Len thought it was a little posed at times, but complimented Mark's fertile, creative mind. Julianne felt it was intricate, but clean and balanced.


RIKER LYNCH - 37 out of 40
Riker and Allison were thrilled to be on top last week, but they aren't resting on their laurels. Yes, they want that immunity from elimination, but Riker has a higher goal. He wants the first "10" from Len... and he gets it! Their 1920's-era Quickstep has a baseball theme and is just the kind of dance routine the head judge loves. The other judges also approved, although not with perfect scores. They gave the couple a trio round of "9's."

NOAH GALLOWAY - 36 out of 40; plus 2 points for Dance-Off
Noah admits he was still smarting from last week's pre-taped package that showed him and Sharna squabbling during a rehearsal. He told his professional partner that he feels very protective of her and their small tiff seems to be water under the bridge. Noah is inspired after meeting Amy Purdy at a rehearsal and she inspires him to go for it. Sharna has decided on a pimp-like character for his 1970's jazz routine. Noah is bit awkward about playing such a flamboyant guy, but he also realizes it's time to let loose and not be afraid to, perhaps, play the fool. Carrie Ann Inaba goes nuts for the number and is barely able to put together a complete sentence when she gives them a "10." Julianne awarded a "9" and said the routine was the most fun she'd had while sitting at the judges' table. Bruno said he wanted to be part of their gang!

RUMER WILLIS - 35 out of 40; plus 2 points for Dance-Off
It was certainly a week of highs and lows for Rumer and Val Chmerkovskiy. Her famous dad Bruce crashed a rehearsal in New York City and gushed about how proud he is of his little girl. His wife joked that he's quickly becoming known simply as "Rumer's dad!" Then, at rehearsal on Sunday night, Rumer pushed her already physically ravaged body to the limit. One daring, but maybe a little too quick dip had her neck crack so loudly we could hear it on camera! Whiplash? Ouch! She recovered by show time and they perform a fun and flirty 1960's Jive. Len said he liked the mix and technique, but would like a little more flair. Carrie Ann thought she lost a little something in the performance this week.

CHRIS SOULES - 31 out of 40
"The Bachelor" felt he made a breakthrough last week, not just because his scores were higher, but because he's "getting it" (dancing). They have a 1940's Foxtrot and Witney Carson comes up with a charming sailor and pretty girl in a train station scenario. Julianne called it awesome. Carrie Ann likes the momentum she sees with the couple. Len said he does see improvement, but they need a bit of polish. Bruno said, "Hello sailor!"

ROBERT HERJAVEC - 31 out of 40
Robert and Kym Johnson are shocked and stunned when they made it through last week's elimination after being in jeopardy. The shark says it reignited a fire to do well in this competition. Luckily, they have the sexy Argentine Tango! These two have nothing but chemistry. Robert jokes that they're going to have to do a LOT of practicing to get these sexy moves just right. Tom gets in on the, "Are they or aren't they," speculation by calling this the "get a room" dance of the night. Len told Robert he's dancing like chutes and ladders... and this week it's up! Julianne liked that Robert showed off a different side to his personality. Carrie Ann felt their chemistry was so incredible, at times, it seemed like Kym was a bit of a distraction!

The dance-off saw Riker and Willow face off with a Salsa. The judges chose Willow as the winner and she added two points to her total.

Noah and Robert's dance-off was the Cha Cha. The judges split down the middle, with each couple receiving two votes. We learn in the tie situation, head judge Len's vote carries more weight and he chose Noah.

Finally, we saw Rumer and Chris each do the Foxtrot. Hands down, Rumer and Val were the winners.

When it comes down to the final 90 seconds of the show, we're in for a shocker! Remember, Nastia has immunity, so she's safe. Also returning: Noah, Robert, Chris and Riker. That means it came down to Rumer or Willow... two traditionally high scorers.