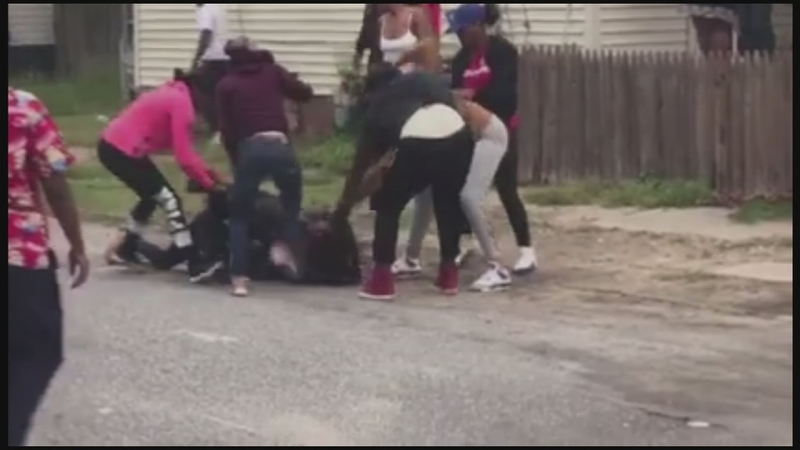 MILLVILLE, N.J. (WPVI) -- Four people have been arrested, and more arrests are possible, over a woman's brutal beating that was caught on video in Millville, New Jersey.

The fight happened on Wednesday in the 100 block of South 3rd Street.

The video shows the victim surrounded and repeatedly hit again and again.

Eventually, the mob surrounding her is pulled away. The injured woman was able to walk away.

But to those who live in the area, and those who witnessed the incident in person, it was heartbreaking.

"That, down here that day, was just unacceptable," resident Zahhir Walker said.

Residents say this is part of a bigger problem; they say this type of violence is done for entertainment on a regular basis.

"You had people from other cities coming to watch this as entertainment. That's sad. Why? There's nothing out here for these kids," said Walker.

"That's what people wanted to see, a fight. Well, they got what they wanted, a fight. People need to grow up," said resident Tiffany Bowman.

They also say fights like these are just the tip of the iceberg and the violence in Millville is out of control.

They say they've lost faith in their neighbors to change.

"This is baby Brooklyn. It's Chicago," said Bowman.

"We've got to think about the younger generation. We need help out here," said Walker.

Millville Police Chief Jody Farabella said along with the four arrests, he's ordered more patrols in the area to try and prevent this from happening again.

"We're not going to stand for that. There are other arrests that are going to be coming," he said. "I'm very happy and commend the officers for doing a great job on that day."

If you know anything about who was involved, you are asked to call Millville Police.