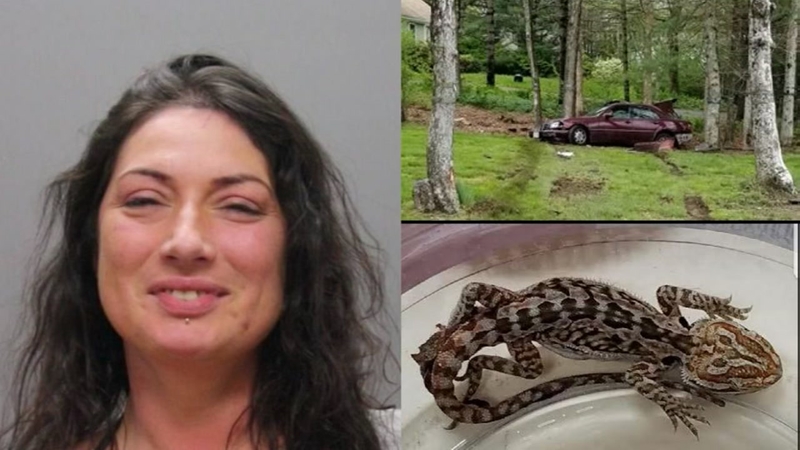 Police say woman drunk and had a lizard in her bra

TAUNTON, Massachusetts (WPVI) -- Police in Taunton, Massachusetts, shared a bizarre incident on their Facebook page involving a woman who had a lizard in her bra.

Police said they responded to a car accident on May 15 just before 1:30 p.m.

When officers arrived at the scene, they approached 39-year-old Amy Rebello-McCarthy and her male passenger 22-year-old Marvin K. Kyewalyanga, who allegedly had been drinking.

"When they approached her, she began laughing and didn't feel the crash was that serious. She was slurring her words and at times drooling," police said.

Police said Kyewalyanga was standing by the vehicle smoking a cigarette, near where gas was leaking.

"He couldn't recall his first or last name as he slurred his way through the conversation. He was feeling a little antsy and decided to move away from the vehicle," police said.

Officers then noticed part of a semi-automatic weapon tucked in the rear of his waistband.

"The male party was taken to the ground and handcuffed. The gun was removed from his waist," police said.

Officers said Rebello-McCarthy was speeding, hit at least six mailboxes, slammed into a parked vehicle in the driveway of a home and wiped out the homeowner's new well cover.

While officers were driving the two to the police department, Rebello-McCarthy told them that she had a bearded dragon lizard in her bra.

"The bearded dragon lizard was transferred to the Taunton Police Department and turned over to the Animal Control officer. It faces no charges at this time," police joked on their Facebook page.

Rebello-McCarthy was charged with operating a motor vehicle under the influence of liquor, driving to endanger and marked lane violation.