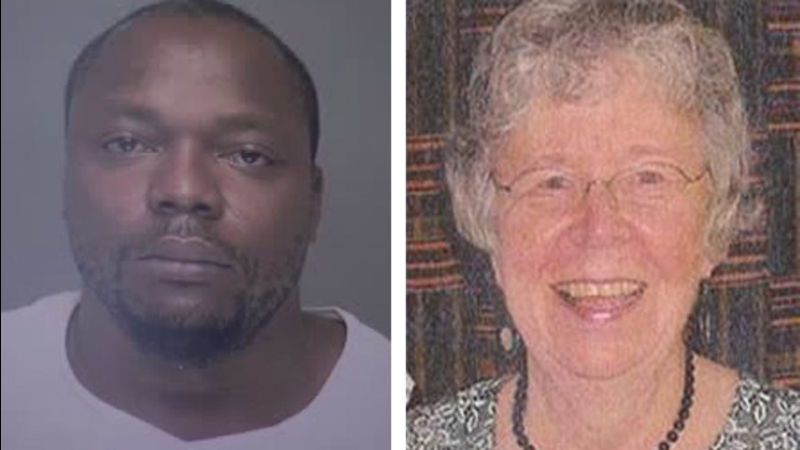 EAST MT. AIRY (WPVI) -- A man has been charged in the murder of an 85-year-old woman found in her East Mt. Airy home last week.

The suspect, identified as 37-year-old Leroy Wilson, was arrested by U.S. Marshals Saturday in the 300 block of Brown Street in Norristown, Montgomery County.

He was formally arraigned Saturday night in the murder of Regina Brunner-Holmes.

He is being held without bail.

According to investigators, Wilson was known in the neighborhood as a handyman and had done work for the victim.

Brunner-Holmes was found dead on Monday in her home in the 300 block of Roumfort Road.

Police say Wilson came to the victim's home and she let him inside.

They believe Brunner-Holmes may have confronted Wilson after catching him trying to steal something.

That's when police say Wilson attacked her, beating Brunner-Holmes and slashing her throat.

According to investigators, Wilson then took some of the victim's belongings and fled in her car.

The vehicle was discovered a day later in North Philadelphia.

In the 6600 block of North Bouvier Street, detectives retrieved a laptop that belonged to Brunner-Holmes.

Police also searched a home on the 3100 block of North Stillman Street, the same block where the victim's car was found abandoned.

Investigators say Wilson's DNA was discovered on the laptop as well as inside the stolen vehicle.

Authorities also say they caught Wilson on surveillance video trying to use Brunner-Holmes' bank card hours after the murder.

With evidence gathered, police obtained an arrest warrant. Wilson was tracked to Norristown and subsequently taken into custody.

Philadelphia Police Captain James Clark commended homicide detectives for their dedication to this case. He said despite the holiday weekend, they were determined not to take off, but to keep working until the suspect was caught.

Last Wednesday, week before the arrest, Action News spoke with Brunner-Holmes' two sons. They say her death is a complete 180 from the life she led.

"The people who murdered my mom treated an 85-year-old frail woman like she was a sack of beans and manhandled her body like she was an inanimate object," said Adam Brunner.

"Everything she did in life, she did to help other people - that's just who she was and what she wanted to do with life," said Eric Brunner.

Brunner-Holmes' two sons told Action News they forgive the person who did this to their mother.