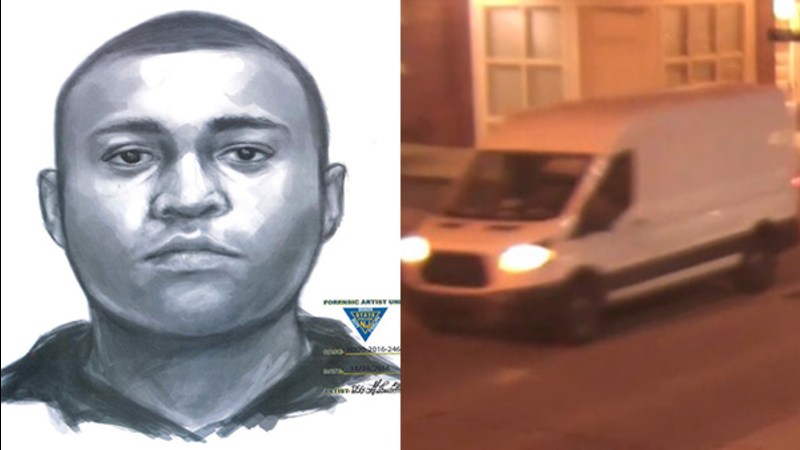 CAMDEN (WPVI) -- The Camden County Police Department is asking the public for help to identify a man wanted in a sexual assault.

"This was a brutal attack. We need to get this guy into custody, and we need the public's help," said Camden County Dep. Chief Joe Wysocki.

It happened on the 900 block of South 3rd Street around 5 p.m. Sunday.

The female victim told arriving officers she was approached by a man in a white van.

Police say the suspect forced her to go with him to a nearby lot next to an abandoned building where he then sexually assaulted her.

"At that point the suspect became extremely violent with her, drug her into a weeded area, and at that point, violently, sexually assaulted her," said Wysocki.

Wysocki also says the attacker beat the victim with a weapon, but offered no further details.

After committing the crime, police say the suspect fled the area.

The victim was transported to Cooper University Hospital for treatment.

Meanwhile, surveillance cameras captured video of that same van traveling along Broadway near Line Street a short time after the attack.

We spoke with people from the community who say these kinds of cases make you afraid to leave your home.

"All you see here are addicts walking around buying and hanging out, and doing stupid, crazy things," said Carlos Aquino of Camden.

The suspect is described as a black or Hispanic male between 5 foot 3 inches and 5 foot 7 inches.

Police have released a sketch of the suspect and a picture of his van.

Anyone with information about this suspect or crime should immediately call the Camden County Police Department tip line at: (856) 757-7042.