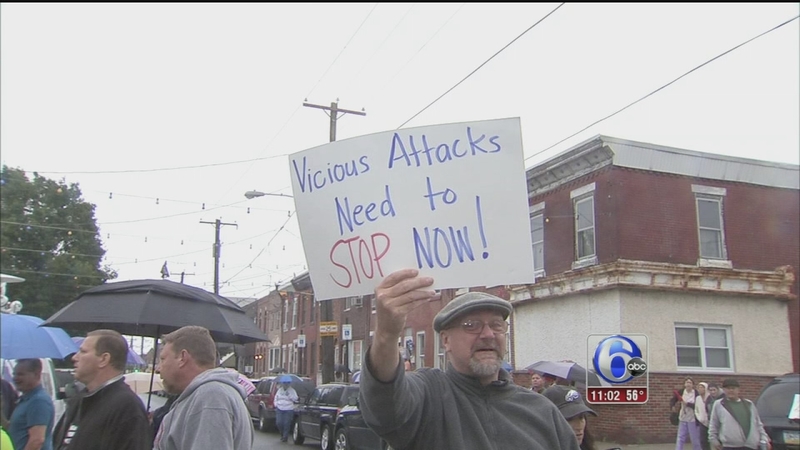 SOUTH PHILADELPHIA (WPVI) -- A South Philadelphia community has had enough of its neighbors being attacked.

The outrage spurred a large rally Tuesday night despite the rain.

150 to 200 people gathered at 4th and Wolf to protest a rash of what they claim are racial attacks at the hands of four black women who live nearby.

"These females have been terrorizing the neighborhood; they have robbed, attacked and beat others in our neighborhood," event organizer Jack Owens said.

A man who did not want to be identified says he and his 10-year-old son were among the victims.

"I was attacked while sitting on my door step, basically for no reason at all," the man said.

Another woman who also did not want to be identified says the women attacked her inside her home calling her racial epithets when she tried to intervene.

The victims further claim responding officers from the 3rd district did not even take a report or make any arrests.

A report was finally taken after Councilman Mark Squilla got involved and there is now an internal investigation.

"We know there were several calls to 911 that day. We're reviewing those calls. That will be put on record and decided why things went down the way they did," Squilla said.

Captain Frank Milillo of the 3rd district says he is looking into the complaints.

"And whether this winds up being a training issue, then we'll retrain the officers, but if the investigation reveals something more drastic where punitive action has to be taken, where formal disciplinary action might have to be taken, then that's what we'll do," Milillo said.

A criminal complaint has been filed with the district attorney's office on the four women said to be involved in the attacks, but so far no charges have been filed.