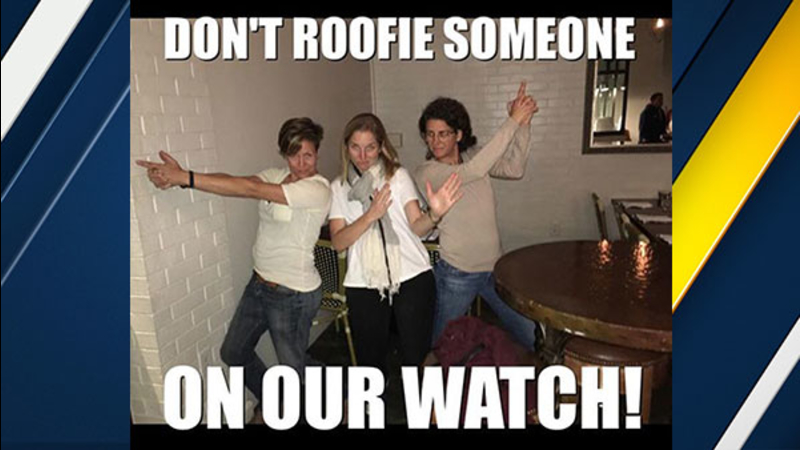 SANTA MONICA, Calif. (WPVI) -- Three Los Angeles-area women are being credited with saving a young woman they didn't know from being drugged by a date at a Santa Monica restaurant.

Sonia Ulrich, Marla Saltzer and Monica Kenyon detailed their story on Facebook on Friday - with a meme in "Charlie's Angels" style poses, declaring "Don't roofie someone on our watch!" The post has already been shared more than 70,000 times.

The three were at the Fig restaurant at the Fairmont Miramar hotel for happy hour on Thursday.

As they were eating, drinking and having a good time, Kenyon's attention was drawn to a nearby table where two people appeared to be on a date. The young woman had excused herself to go to the bathroom.

Monica Kenyon, Sonia Ulrich and Marla Saltzer helped save a woman from being drugged by her date at a Santa Monica restaurant.

Kenyon said she could see the man fumbling with his date's glass at the table and reaching for something.

"I just stared at him and watched something fall from his hand into the glass below," she recalled in an interview with ABC7 Eyewitness News.

The other women noticed Kenyon get a funny look on her face as she watched the apparent drugging unfold in front of her eyes.

"I said, I just saw that guy put something in her drink. We're all like, what do we do?" Kenyon said.

Ulrich went to the bathroom to find the girl and warn her.

"I found her in there and I just said 'Hey I know this is weird, but we saw that guy you're with put something in your drink'."

Ulrich asked her how well she knew the man.

The two had worked together for more than a year, the woman told Ulrich.

The woman on the date returned to the table and tried to act as if nothing had happened.

In the meantime, the three women alerted the restaurant manager, who talked to security. They checked the video and confirmed the women's story.

Soon, Santa Monica police had arrived and took the man away.

The Santa Monica Police Department later confirmed that the man had been arrested with multiple vials of a clear substance on him that has not yet been identified.

For the three women, besides being able to save the young woman, they said the reaction from people online, as well as that night at the restaurant, has been gratifying.

"The crazy thing, though, afterwards, is people from all over the dining room were coming over and thanking us," Ulrich said. "And they all had stories of it happened to them or their sister or their roommate."