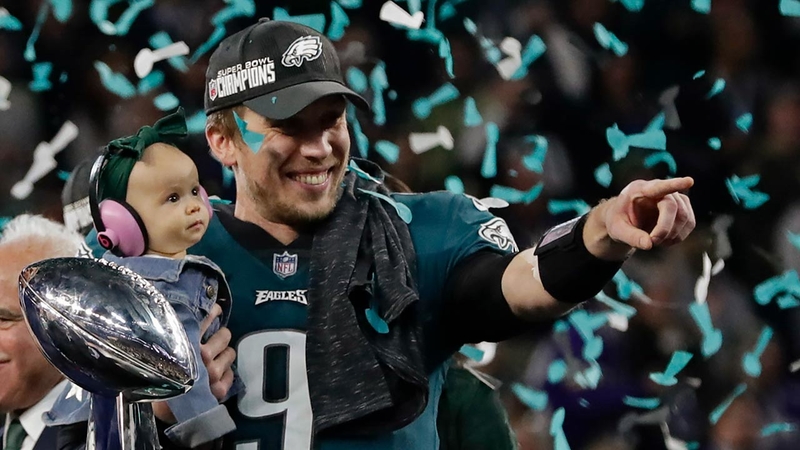 PHILADELPHIA (WPVI) -- As Philadelphia says thanks to Nick Foles who is embarking on the next chapter of his NFL career, the Super Bowl LII MVP is saying thank you back to the city.

In an article posted to The Players' Tribune, Foles writes his gratitude to Philly and Eagles fans.

"The first time I signed with the Eagles, they picked me. I was just a 23-year-old kid out of Austin, Texas, a mid-round draft prospect.

It's funny, because, leading up to the draft in 2012? Philly was the team that had shown me the most attention by a mile. And after meeting with Andy, Doug, Howie, and everyone else..... man. I really wanted to play for them. But I honestly figured it was more like a smoke screen or something. I didn't actually think they would draft me," Foles begins.

Foles goes on to say, years later, the reason he returned to Philadelphia as a 28-year-old free agent was actually not because of football.

"It was that Tori and I were expecting our first child - our daughter, Lily. And as much as I admire the Eagles as a franchise? I love Philadelphia as a city," Foles says.

In his article, titled "Thank You, Philly," the former Eagles quarterback mentions how much the city means to him and his family.

"And there's just something about it..... but my heart said Philly. I'm pretty sure a piece of it always will," Foles writes.

He thanks the people who he says helped "make this last chapter so special," including Andy Reid, Jeffrey Lurie, Howie Roseman, Doug Pederson, and everyone in the Eagles organization.

"I even want to thank Chip Kelly for trading me in 2015. Without that challenge in my life, I wouldn't be the player I am today," Foles says.

Foles thanks his teammates, saying "there is nothing that compares to game day with y'all."

And, of course, he gives thanks to the city of Philadelphia and Eagles fans:

"Because for as much of an honor as it's been to play for this team and this city...... the truest privilege has been over the last year, in the time since we won the Super Bowl - having Eagles fans share their stories with me. Having them remind me of how we didn't just win the Super Bowl; we won the Eagles' first Super Bowl ever. Getting to hear from Philly natives about how their father, or father's father, or mother, or mother's mother, cried tears of happiness after the game. Learning about how, for most people, rooting for the Eagles is more than a decision - it's a birthright. It's family."

Foles ends his thank you note with these four lines:

"Philadelphia, thank you for welcoming me into yours.
You will forever be a part of mine.
Love Always,
Nick."
Thank you, Nick. Fly Eagles Fly.
Report a correction or typo
Related topics:
sportsnick folesaction news sportsdoug pedersonchip kellyphiladelphia eagles
Copyright © 2021 WPVI-TV. All Rights Reserved.
PHILADELPHIA EAGLES
Projected NFL draft order for 2022: Who has the No. 1 pick?
What 2021 NFL first-round picks did with their first-TD footballs: ...
QB Hurts says Eagles' MNF loss to Cowboys all on him
Why was Monday so rough for the Eagles? The Postgame Show for Week 3.
TOP STORIES
AccuWeather: Some Gusty Thunderstorms Today
Man found dead in restaurant vent after burglary attempt: Police
Teachers, school staff in Delaware must get vaccine or undergo testing
Gabby Petito's family speaks as FBI manhunt continues
One Liberty Observation Deck now permanently closed
Gunman who killed 5 in Capital Gazette shooting given life sentence
QB Hurts says Eagles' MNF loss to Cowboys all on him
Show More
Cowboys poke fun at Eagles coach's shirt after their MNF win
'Dancing with the Stars' first elimination
Pfizer submits data to FDA on its COVID vaccine for kids 5-11
Philly schools Superintendent Dr. Hite will end tenure next year
R. Kelly found guilty on all counts in sex trafficking trial in NYC
More TOP STORIES News