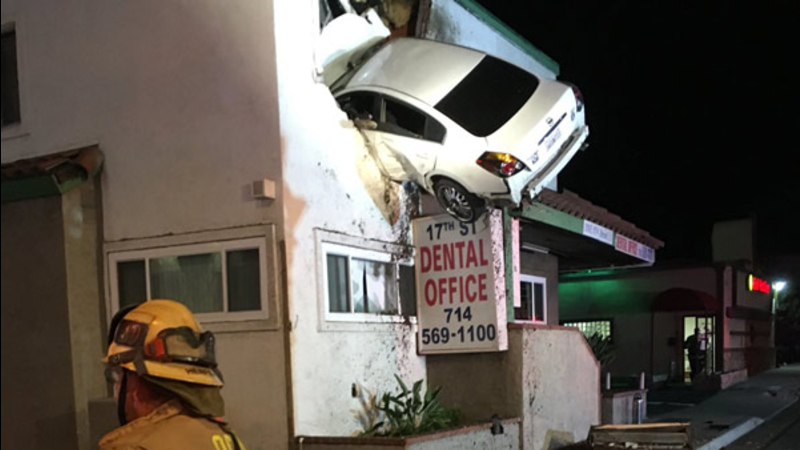 According to the Santa Ana Police Department, the collision was reported shortly before 5:30 a.m.

The white Nissan Altima crossed three lanes before it hit a center divider, soared into the air and plowed into the two-story structure, the Orange County Fire Authority said.

The incident caused a small fire that injured one person, who managed to get out of the sedan unassisted, the OCFA said.

OCFA in Santa Ana of a vehicle that crashed into the building. The fire was quickly extinguished, both victims are out of the vehicle safely with minor injuries. Members from OCFA & LA COUNTY Urban Search & Rescue teams are removing the vehicle from the building. pic.twitter.com/x29WvTkNGk

Firefighters responded to the scene and extinguished the blaze, then rescued a second person who was trapped inside the sedan.

It was unclear if drugs or alcohol played a role in the crash, police said.

OCFA in Santa Ana with a vehicle that crashed into the second floor of a small Office building. The vehicle hit the center divider and went airborne and landed into the building. One person self extricated, the other person is still trapped in the vehicle. USAR from OCFA On scene pic.twitter.com/Lm5b4oyCIm